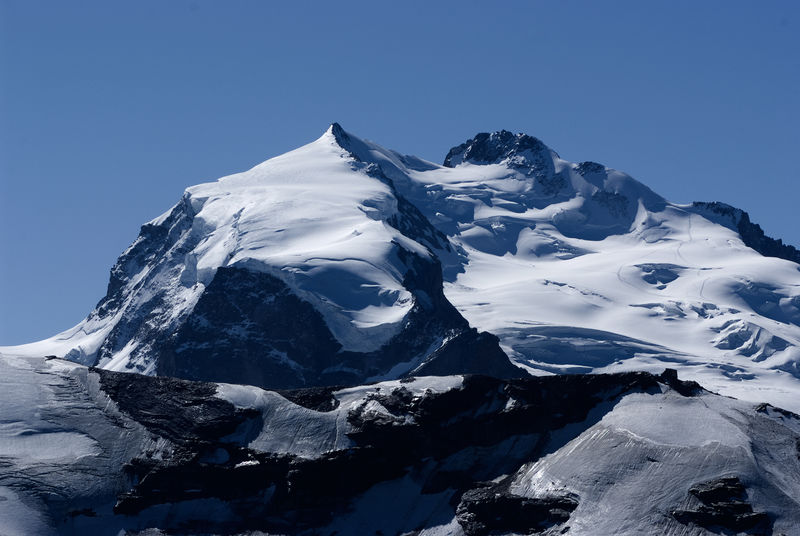 First ascent
The former Ostspitze was first climbed in 1854 – a year before the Dufourspitze – by Christopher Smyth, James G. Smyth and Edmund Smyth. Back then, it was unclear which of the two peaks was higher – the difference is in fact just two metres.

Related history
Guillaume-Henri Dufour (1787-1875) has gone down in history as the “peacemaking general”. Among Swiss, he is also familiar as the man who created Switzerland’s first topographical maps. His contemporary, Henry Dunant (1828-1910), witnessed the traumatic events at the Battle of Solferino (1859), and his attempts to organise help for the thousands of wounded soldiers led him to found the Red Cross in 1863. To celebrate the 150th anniversary of the movement’s foundation and of the adoption of the first Geneva Convention in 1864, the former Ostspitze was renamed the Dunantspitze in 2014. Today the two neighbouring mountain summits pay fitting tribute to the pair of great Swiss visionaries.

Origin of name
In October 2014, in the presence of Didier Burkhalter, President of the Swiss Confederation, the former Ostspitze in the Monte Rosa massif was renamed the Dunantspitze in honour of the founder of the Red Cross movement. The Monte Rosa massif straddles the border between Italy and Switzerland.