In the 2016/17 business year, Zermatt Bergbahnen AG generated an all-time record result, with sales of CHF 69.6 million and a cash flow of CHF 30.3 million. The company saw an increase in revenue both from year-round excursion tourism (+8.3%) and winter sports (+3.5%). 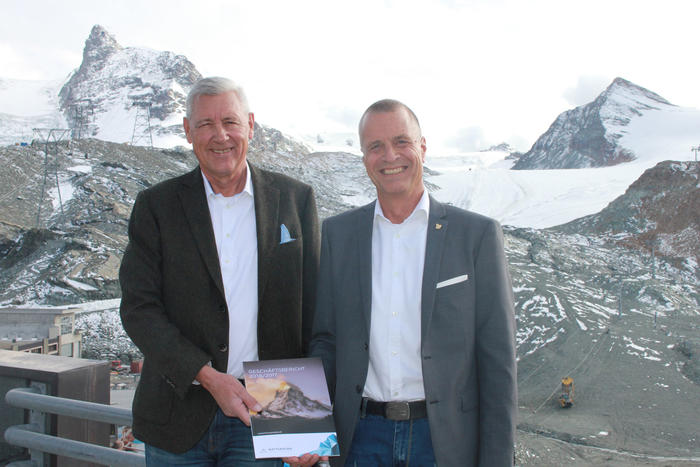 On the occasion of the 16th Annual General Meeting on Trockener Steg on 22 September 2017, Board Chairman Hans Peter Julen presented the operating figures for 2016/17 – the best results in the history of the company. Operating income was up CHF 3.4 million to CHF 69.6 million, EBITDA reached CHF 34.4 million, up by 12.6% year on year, and cash flow rose by 14.5% to CHF 30.3 million.

Positive trend in the winter business

The increase in winter skier days is a particular source of satisfaction for Zermatt Bergbahnen AG’s representatives, rising by 3.5% during the business year; and without taking into account users starting out from Italy, the figure for Zermatt alone was actually up 5.1% to 1.32 million. One reason for the positive trend in the winter business is without doubt the reliability of snow cover in the Zermatt ski resort. While resorts throughout the Alps had to contend with low precipitation levels and a warm winter, Zermatt Bergbahnen AG was already able to offer visitors 200 kilometres of slopes on the first day of the season: 26 November 2016. This includes the Cervinia/Valtournenche pistes. This is the result of continually adding to and optimizing the snow-making equipment, without which the season would only have started on 7 March and would have had to close down just three weeks later in this year of low snowfall.

Although the ski business is without doubt the most important field of activity for Zermatt Bergbahnen AG, the company has been pursuing a strategy of diversification for many years, expanding its product range on the mountains and tapping new markets further afield. Thanks to these measures, revenue from individual tourist traffic increased across the board by 8.3% to more than CHF 14.1 million. In the summer alone, revenue from passenger travel saw a year-on-year increase of 5%.

Despite the ongoing currency crisis and uncertain economic outlook in Europe, the Board of Directors of Zermatt Bergbahnen is continuing to set its sights on a forward-looking investment policy. The high quality of the infrastructure and the alpine experience offered to guests will be consolidated and further developed. For example, the company is currently constructing the world’s highest 3S cableway from Trockener Steg to Matterhorn glacier paradise. With a budget of over CHF 50 million this represents the biggest single investment in the history of Zermatt Bergbahnen AG. The new lift is scheduled to open on 29 September 2018 and will go by the name of the “Glacier Ride”.