Four Matterhorn sections in one day

Record on the Matterhorn: Zermatter Andreas Steindl and Italian Francois Cazzanelli succeeded in climbing all four ridges of the Matterhorn in 16 hours and 4 minutes. They were the first to do this since Hans Kammerlander (ITA) and Diego Wellig (CH), who achieved the same feat in 1992 in 23.5 hours. 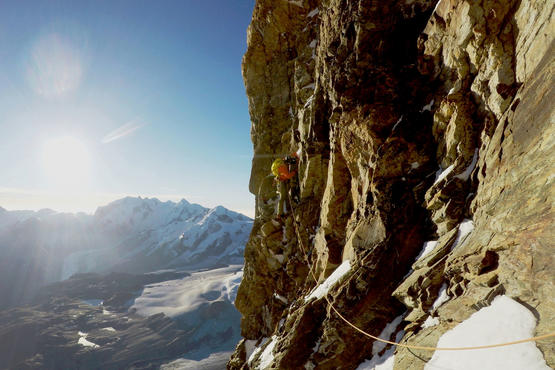 Steindl and Cazzanelli started at the Hörnlihütte on Wednesday 12 September 2018 at 14:20 hrs and climbed up and down the Hörnli ridge. This is the traditional route and the easiest of all the four ridges. They returned to the Hörnlihütte two and a half hours later. This route normally takes alpinists eight hours.

The duo then set off along the second of the four ridges, the Furgg ridge. This is the most technically difficult. They reached the summit for the second time four hours later and then descended using the traditional route along the Hörnli ridge.

Fatigue on the Zmutt ridge

"We started to feel tired on the third ascent over the Zmutt ridge and so climbed a bit slower to maintain our concentration. This was essential as we were climbing unsecured most of the time," said Steindl. Exhausted, the climbers from Zermatt and Cervinia reached the summit for the third time. After a short break, they headed over the Italian ridge, the Lion ridge, down into the Col du Lion, before tackling the fourth and last ascent.

The fourth Matterhorn ridge tackled by the two alpinists was the Lion ridge. "We needed all of our strength to climb the last 900 metres, and ended up stopping every few minutes to catch our breath so that we were able to concentrate and reach the top safely," said Steindl. After 15 hours, Steindl and Cazzanelli stood on the summit of the 4,478-metre high Matterhorn for the fourth time.

After a brief stop to take photos, the two climbers continued down the Hörnli ridge again, finishing their adventure at 18:24 hrs in the Hörnlihütte. They took 16 hours and 4 minutes to cover all four ridges (9,600 metres ascent and descent), setting a new record. Only Hans Kammerlander (ITA) and Diego Wellig (CH) had previously climbed all four ridges of the Matterhorn in a single day. This was in 1992 and it took them 23.5 hours.

At the end of August 2018, Steindl ran from Zermatt up the Matterhorn and back in less than four hours. After his latest adventure, the 29-year old mountain guide has now stood on the Swiss landmark’s summit 94 times; it definitely won't be the last.