The Matterhorn, the king of mountains, is the most-photographed mountain in the world. It is myth and emblem for Alpinists and photographers alike, as well as Switzerland’s most famous landmark and symbol. 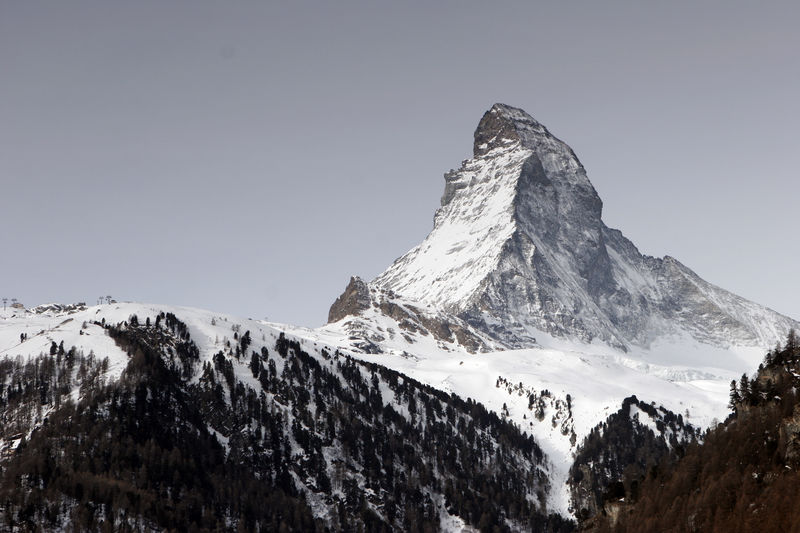 The Matterhorn has a magic attraction, both for day-trippers who love the view and for Alpinists who love a challenge and dream of climbing the peak of the Matterhorn at least once in their lives. The most popular ascent route is the Hörnligrat.

First ascent
14 July 1865: the Matterhorn was the only remaining famous 4,000-metre peak to be conquered.

Essence of the Matterhorn
Thanks to its shape and its free-standing position, the Matterhorn is considered to be the epitome of a mountain. There is no better-known mountain in the world whose natural shape is so close to a pyramid. 100 million years ago, enormous forces brought Africa closer to Europe. 50 million years later, as the rock masses folded and deformed, the Matterhorn was born from the rock thrusting upwards.

Origin of name
The Matterhorn is first mentioned in medieval documents as “Mons Silvus”. The name later mutated into “Mons Servinus” and “Mons Servin”, and finally became “Cervin” in French and “Cervino” in Italian. The Matterhorn was first referred to in writing as “Mont Cervin” in 1581, and later also as “Monte Silvio” and “Monte Servino”. The German name “Matterhorn” first appears in the year 1682. The name is probably derived from “Matte”, meaning meadow, referring to the grassy extended valley under the Gorner gorge, which has now been almost completely covered by the village of Zermatt (“zur Matt”). The mountain is also known by the locals as “ds Hore” (“the peak”, in Zermatt dialect) or “ds Horu” (in Upper Valais dialect).

A story of victory and death
From 1857 onwards, several unsuccessful attempts were made to climb the Matterhorn, mostly from the Italian side. When Edward Whymper arrived in Valtournenche in July 1865, this was already his sixth summer season in the area. During the previous five summers, Whymper had failed to climb the mountain regarded as the King of the Alps and considered to be unclimbable. It is not the highest summit: the Monte Rosa, almost directly opposite, is higher by almost 170 metres. Yet the mighty rock pyramid had so far defeated all would-be conquerors. Each unsuccessful climb boosted the mountain’s aura of invincibility, so that even experienced local mountain guides often turned down generous offers from foreign expedition leaders. But the Briton did not believe in mountain demons, and his project was based on calm reflection. He had studied the books of Horace Bénédict de Saussure and come to the conclusion that the mountain could be conquered from the Swiss north-east ridge rather than the Italian south-west. It was not Breuil that would be his starting point, but Zermatt! The place where Mont Cervin was known as the Matterhorn – where Whymper had once fallen almost 60 metres.

In 1862, John Tyndall was the first to climb the south-west shoulder, today’s Pic Tyndall, together with the guides Bennen, Anton Walter, Jean-Jacques and Jean-Antoine Carrel. The continuation of the ascent along the Liongrat ridge seemed impossible to him. Whymper also regarded the Liongrat ridge as unfeasible. He therefore tried to persuade his friend Jean-Antoine Carrel to attempt an ascent from the Zermatt side, but the latter insisted that he wanted to climb from the Italian side. In July 1865, Whymper happened to learn from a publican in Breuil that Carrel had set off for the Liongrat ridge again – without informing Whymper. Whymper felt he had been deceived, and hurried to Zermatt in order to assemble a group for an immediate attempt via the Hörnligrat ridge.

On 14 July 1865, Whymper’s 7-man team completed the first ascent of the Matterhorn. The group climbed onto the shoulder over the Hörnligrat ridge and, further up, in the area of today’s fixed cables, diverted onto the north face. Edward Whymper was the first to reach the summit, followed by the mountain guide Michel Croz (from Chamonix), the Reverend Charles Hudson, Lord Francis Douglas, Douglas Robert Hadow (all from England) and the Zermatt mountain guides Peter Taugwalder senior and Peter Taugwalder junior. They spotted Carrel and his group far below on the Pic Tyndall. As the climbers were descending again, and while still above the so-called “Schulter” (“Shoulder”), the four leading men in the rope group (Croz, Hadow, Hudson and Douglas) fell to their deaths on the north face. Three of the dead were recovered several days later on the Matterhorn Glacier, but the remains of Lord Francis Douglas were never found.

Carrel also reached the summit three days later by traversing from the north end of the Italian shoulder across the upper west face and onto the Zmuttgrat ridge (the so-called Galleria Carrel), and then completed the ascent along the ridge.

Accidents on the Matterhorn
Between 1865 and the end of the summer season 2011, an estimated 500 climbers died on the Matterhorn. Every year, between 300 and 400 people attempt to climb the peak with a guide; of them, about 20 fail to reach the summit. Roughly 3,500 people tackle the Matterhorn without a guide each year; some 65 per cent turn back en route, usually because of lack of fitness or an insufficient head for heights. Poor weather also often plays a role: conditions change very quickly (plummeting temperatures, storms). Air Zermatt, founded in 1968, is frequently called to make rescues. On a day with ideal conditions, up to 300 mountaineers tackle the “Hore”.

Since in the 1980s, when fixed ropes were installed on the upper part (top third section) of the Matterhorn, fewer Alpinists have met their death compared to the early years. The ropes are always checked and repaired in early summer. The first fixed rope was already mounted in 1868. The very tricky climbing sections above the Roter Turm until the beginning of the Unteres Dach were secured with fixed ropes already at that time. The new challenge in recent years has been the melting of the permafrost. Through this, there has been an increase in falling rocks along the climbing routes.