On Saturday, 15 September 2018, eighty women from across Europe who have breast cancer climbed the Breithorn (4,164 m) near Zermatt. They were accompanied by 24 mountain guides from Zermatt. 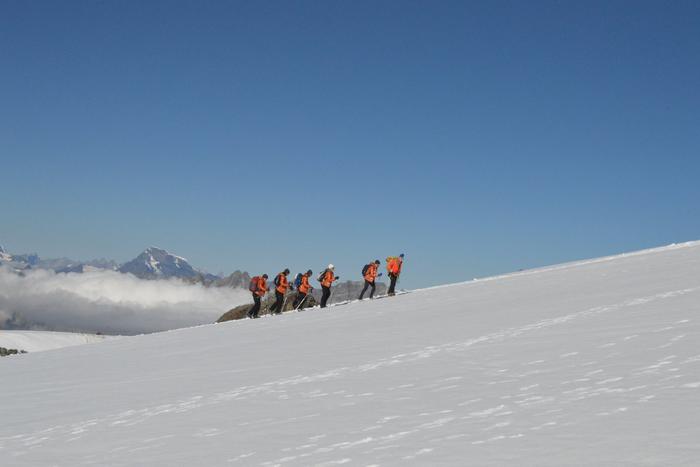 The project aims to raise public awareness of breast cancer and its consequences. - © Spirit of Solidarity

As part of the "Spirits of Solidarity" project organised by Hamburg couple Ute Louis and Karl-Otto Louis Peiffer, eighty women with breast cancer climbed the 4,164 metre-high Breithorn near Zermatt on Saturday, 15 September 2018. The women from across Europe, accompanied by 24 mountain guides from Zermatt, were highlighting the need for greater solidarity.

This is the third time that the project has been conducted; it previously ran in 2008 and 2011 under the name "Rope of Solidarity". It aims to raise public awareness of breast cancer and its consequences. Following the climb, there was a panel discussion on the topic in Zermatt on the Sunday involving representatives from medicine, culture and politics.

Hamburg couple Ute Louis and Karl-Otto Louis Peiffer have taken over the patronage of "Spirits of Solidarity". Ute Louis said to the "Walliser Bote" newspaper: "We feel it is important to shine a spotlight on this issue – breast cancer affects all of us. We want to give more attention to women suffering from this disease, show them the respect they deserve for what they're coping with and tackle the taboo surrounding it." Karl-Otto Louis Peiffer added: "'Spirit of Solidarity' wants to initiate change. Women suffering from this disease need to be noticed. They have to re-arrange their whole life, and they need more support to do this, as do their relatives."