According to TrustYou ratings, two out of the six best hotels in Switzerland are in Zermatt: Hotel Coeur des Alpes and Hotel Bellerive. 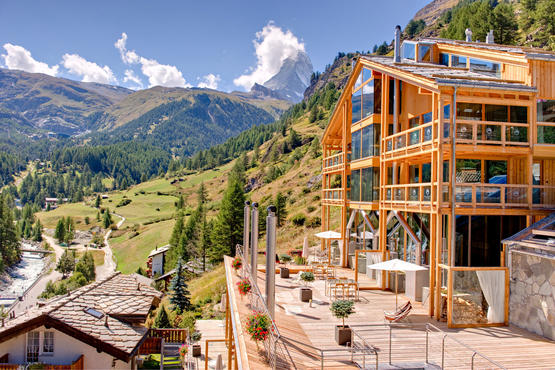 There are lots of hotel ratings and rankings, so the TrustYou score helps by amalgamating 250 ratings sources from around the world. A look at the score shows that out of the six top-rated Swiss hotels in the 5-star, 4-star and 3-star categories, there are two Zermatt hotels: ‘Coeur des Alpes’ and ‘Bellerive’.

The TrustYou score is an average value over the last 24 months calculated on 5 September 2019, with newer values given more weighting than older values. It only considers establishments that have received at least 100 ratings in the last 12 months.

Interestingly, the data shows that a bigger establishment is not necessarily better. Out of the top-ranked hotels, most have less than 30 rooms. Smaller hotels seem to be more successful at creating an atmosphere that guests like. "It is definitely easier for a small establishment," says Mario Noti from Bellerive. "Guests are more forgiving of mistakes when they can talk personally to the host." A smaller range of facilities also simplifies things. "Fewer facilities mean fewer opportunities for criticism."

Ratings are the new currency by which a hotel is measured. They can determine how a business is run and also boost direct bookings. In Bellerive, 80 per cent of international guests who find the hotel on ratings sites book directly. "Having a good reputation on ratings sites increases direct bookings," says owner Mario Noti. Guests who book directly are rewarded with an attractive room rate, generally at least 10 per cent less than the one listed by OTAs.

Not using OTAs attracts other guests

Host Lena Müller at Coeur des Alpes doesn't push guests to rate the hotel. Instead, it should be the product that inspires guests to express their opinions. “Ratings should come to us, not the other way round.” The hotel has an excellent location and a personal touch. Leni Müller's aim is "that when guests leave, they say they’ll come back." It's the product that should be the focus, she says, not the sales pitch. That’s why Coeur des Alpes is not listed on OTAs. However, Leni Müller does like TripAdvisor, as this is how many international guests have found the hotel. She makes an exception in winter, therefore, and asks regular international guests to leave feedback on TripAdvisor to ensure the hotel doesn't lose its position in the rankings.

Hotel Bellerive makes a conscious effort to go the extra mile. "We offer more than guests expect from a 3-star Superior hotel," says owner Mario Noti. This applies to both the infrastructure and service. For guests who book direct, the minibar and video-on-demand are included in the room price. Hosts Katja and Mario Noti transport all winter guests who stay for a week or longer to and from the train station at the beginning and end of their stay. This leaves a positive, lasting impression that guests take home with them. When guests arrive, the hosts themselves show them to their room. Their positive ratings are reflected in the fact that 90 per cent of international guests have found the hotel via ratings sites.