Zermatt – a Paradise for Birdwatchers

Whether golden eagle, bearded vulture, spotted nutcracker, rock partridge or Alpine chough – all of these bird species can be observed in the Zermatt mountain world with little or only modest effort. These birds are the heroes of the air and represent the ‘wild nature’ of the Alpine landscape. 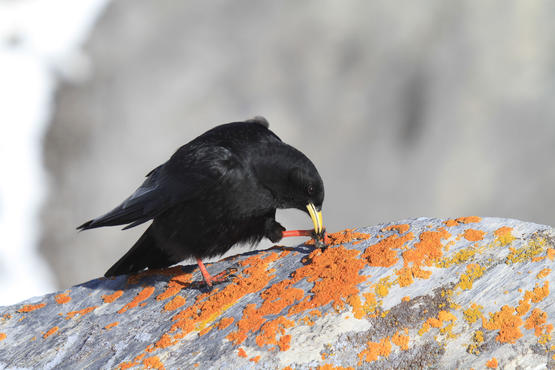 The Zermatt-Matterhorn destination, with its varied mountain types, Alpine meadows and forests, is an ideal location for bird watching fans. Because the diversity of bird species is so large, the Mattertal area is a so-called European “Important Bird Area” (IBA) Region, in other words, an area where many rare and threatened bird species can be found.

Many of Zermatt’s bird species are conveniently found around the mountain railway and lift stations. Others must be sought out in the Alpine region. Everywhere, the rule applies: birds are sensitive to disruptions and, therefore, they should not be approached. Thus, the most important utensil a birdwatcher has is a pair of binoculars or a telescope. In autumn and late autumn, the Theodul Pass serves as an Alpine transit route for migratory birds. These journeying species travel from the far north in the direction of the Mediterranean. Therefore, flocks and individual birds can be observed when they take on the last Alpine transit section via the Theodul Pass in their journey toward Africa.

The animal photographer and filmmaker Vinzenz Imboden from Täsch has taken many wonderful images of animals living in the wild of the Valais Alps and in the Zermatt surroundings. He has observed the black grouse during its courtship display, the acrobatic flights of the Golden Eagle and much more. And he has also captured the rutting buck during the chamois mating season, the stags and marmots in photographs and on video.

These ravens are clever and sharp observers. They quickly realise from very far away when they can be spoiled by culinary delicacies at a mountain restaurant. They fly with impressive flight movements in the Alpine air streams. Notable features: red legs and yellow beak.
Watching
In good weather near, the Gornergrat mountain station, Trockener Steg and Rothorn. In bad weather, often in the village and primarily in winter.

The red-billed chough is one of the endangered raven species in Switzerland and is only found in Valais. Only around 60 to 70 pairs still live in Switzerland. It nests on cliff crevices and is an excellent flying acrobat. Pairs are monogamous and remain true for their entire lives. They differ from the Alpine chough primarily through their red, slightly sickle-like beaks (the Alpine chough has a yellow beak). Other features: red legs (claws), wingspan up to 80 cm.
Watching
Zermatt: in the Gornergrat/Riffelhorn vicinity, at Turuwang / Trift.
Täsch: at various locations. Randa: at the SAC huts (Weisshorn, Dom, Täsch and Kien huts)

The rock ptarmigan is a survival artist in severe cold conditions. In winter, it digs a snow cave for itself to survive the cold nights. The legs are feathered. This foot feathering grows even stronger with the winter plumage so that the birds can walk on the snow. In summer, the rock ptarmigan changes to a spotted, earth-coloured plumage.
Watching
Zermatt: Gornergrat, Tuftern, generally in an area near the tree line
Täsch: Täschalp – rear upper part

The bearded vulture has a wingspan of 2.8 m, making it the largest bird in the Alps. It is also one of the rarest. In 2012, a bearded vulture pair was successfully resettled in Zermatt and raised their first chick in 2016. They regularly fly around Zermatt looking for food, mainly carrion, i.e. animals who have died in the mountains. Ninety per cent of their diet comprises bones.
Watching
Flying in circles around the Riffelhorn

The black grouse perform a courtship display in groups with song and dance every spring (April and May). In contrast to the capercaillie or wood grouse, they are smaller but spread their tail feathers in a display just as much during the courtship dance.
Watching
Difficult to observe, in various areas, near forests, in forest glades and meadows with some tree growth.

The great spotted woodpecker sometimes draws attention through its drumbeats on tree trunks. But the agile bird knows best how to hide from unwanted observers – he simply disappears behind the tree trunk.
Watching
In the forests Zermatt, Täsch and Randa. The greater the density of the tree trunk, the more likely it is to be found.

The Eurasian jay will also attract attention even if someone is not out bird watching. While hiking, one often finds turquoise-black small striped feathers on the ground. And yes, where someone hears rasping sounds, it is likely the Eurasian jay.
Watching
In forests with large numbers of stone pine trees in Zermatt, Täsch and Randa.

This striking grey-red bird is at home in the entire upper Mattertal up to the Alpine level of Zermatt. It flutters and climbs on steep cliff walls.
Watching
On warm cliff faces where insects fly. Alpinists see this bird more often than hikers.

The symbol of the Alps, King of the Skies, symbol of freedom, size and strength. Its wingspan stretches up to 2.2 m wide. An eagle pair lives in the area of the Edelweiss Pension direction Trift. This pair can often be observed flying together. During a strong north wind it can be found sailing over the Schweifinen climbing area.
Watching
Zermatt: Hubel, Trift, Riffelhorn, Rothornhütte, Riffelalp, Ried
Täsch – Randa: Dom, Täschhorn, Pfulwe, and Weisshorn, Kien, Dom huts

This shy partridge is rarely seen because of its colouration matching is rocky surroundings. If someone remains very still and sitting in the area of glacial drift sediment and glacial terminal moraines, there is a chance of seeing it. Only around 4,000 pairs survive in Switzerland.
Watching
Zmutt Glacier moraines and terminal areas, the Fluhalp region.

It is the feathered forester, a clever raven. It extracts thousands of stone pine nuts from the cones and buries them as reserves in hidden caches far beyond the edge of the forest. Very cleverly, it often also seeks places where the snow melts quickly so that it can get to its reserves in winter as well. An unintended benefit of this is new stone pine trees. For example: the Schmid’sche Bäumje (the trees of Schmid) at Hubel.
Watching
Zermatt: Riffelalp, Zmutt, im Moos
Täsch: Täschgufer
Randa: Wildikin, Chüebodmen

The sleek and agile peregrine falcon can be observed hunting in the mountain areas time and again. It achieves unbelievable speeds while diving to seek its prey. The fluttering of its speckled wings in the trees can often be seen. At dusk, it can appear to look like a flashlight flaring up. Sitting still, it is practically invisible.
Watching
Zermatt: Hubel, Ried, Stafel
Randa: Chüebodmen

Animal photographs from Zermatt and Valais