For ten years, researchers from ETH Zurich have been collecting data from the Hörnligrat ridge on the Matterhorn. Their network of sensors has allowed rock falls to be more accurately predicted. 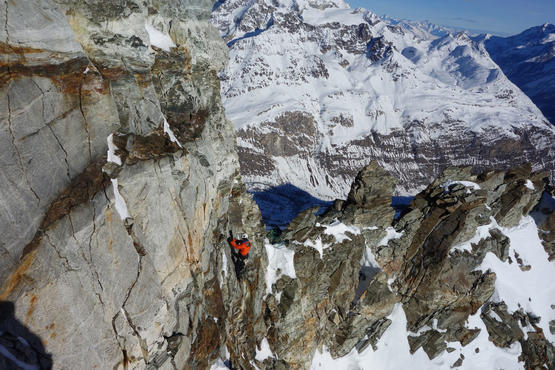 Due to global warming, the topic of permafrost is increasingly being focused on. The Matterhorn is impacted by this, too, as the rock masses are held together by ice (permafrost). When temperatures rise, this ice warms and melts, right down to considerable depths. This breaks the bonds between the rocks and can cause rock falls,

A rock fall like this occurred on the Matterhorn in the hot summer of 2003, when 1,500 cubic metres of rock broke off from the Hörnligrat. This fall was the impetus for the PermaSense project, a unique, interdisciplinary research project led by geologists and engineers from ETH Zurich and other institutions, including the Universities of Zurich and Basel.

A decade of incredible data from the Hörnligrat

The PermaSense project started in 2006 and aimed to record measurements and observations that had previously not been possible.

The project resulted in an ETH study comprising ten years’ worth of data. This came from sensors on the Hörnligrat  ridge which sent the data wirelessly to the Klein Matterhorn and then onto the data centre at ETH Zurich in real time.

"This set of data is one of the largest, most comprehensive and varied sets of data in the history of permafrost research", said Jan Beutel, Senior Researcher at the Institute for Computer Engineering and Networks at ETH Zurich. Beutel is the driving force behind the project.

"Seismic technology particularly helped us in the last three years of the study as we were able to measure what we’d wanted to from the beginning, namely, rock falls. We were able to detect patterns in the signals coming from the mountains that made these events quantitatively recognisable," said Beutel.

Using the seismic sensors, they were able to record many events, such as the initially invisible formation of cracks in rocks.

"The vibration resonances that occur in rocks fluctuate significantly over the course of the year," said Beutel. This is linked to the melting and freezing on the mountain. Many of the crevices and cracks are filled with ice and sediment. In winter, this mixture freezes solid. In summer, it then melts and the bonds in the cracks change. This makes the detached part of the rock bigger and it vibrates at a deeper frequency. The opposite happens in winter, when it vibrates at a higher frequency.

"Using these seismic and acoustic measurements, combined with measurements of the widths of fissures and photographs of the study location, we can depict with considerably accuracy how the permafrost is changing and make predictions about where something might happen," said Beutel.

Matterhorn know-how used in other projects

Beutel would like to transfer the know-how from ‘Horu’ to other projects. The technical and geological knowledge acquired could be used to predict natural disasters at critical locations on steep terrain or on mountains.