Zermatt Bergbahnen AG continues to ride a wave of success 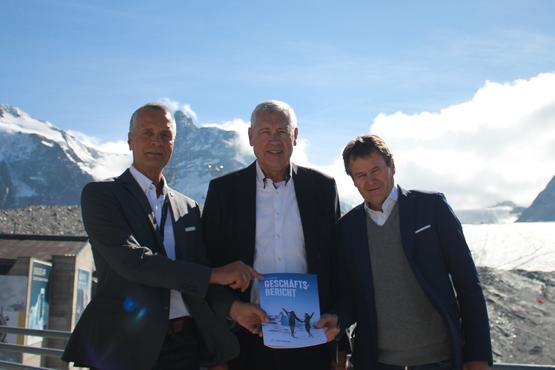 Summer business again showed a very positive trend. Visitor numbers for excursions increased by 5.3%, which had a positive impact on summer revenues. Asian markets again showed the most marked improvement – confirming the effectiveness of the intensive marketing effort in recent years. The strategic goals set out by the Board of Directors for 2022, which placed an emphasis on the development of summer business, also contributed to the improvement in revenues. As a result, the share of summer business in overall transport revenue increased to 25%, measured against the baseline of very profitable winter business.

Following on from this extremely successful summer in 2017, the resort experienced a harsh winter beset by turbulent weather conditions which placed great demands on all employees and facilities. The exceptionally high snowfall in January 2018 took its toll on Zermatt Bergbahnen AG’s infrastructure. The closure of the Blauherd-Rothorn cable car at the end of March 2018 also undermined the figures for the winter season. But despite these adverse circumstances, it was still possible to stabilize winter business at a respectable level. Overall, winter business declined by 0.5% year on year.

At the end of the business year, we were able to post a new record result. Compared with the previous year, operating income increased from CHF 69.59 million to CHF 69.63 million, EBITDA from CHF 34.35 million to CHF 34.61 million and cash flow from CHF 30.35 to a highly gratifying CHF 30.68 million. The company took advantage of the outstanding earnings situation to commit long-term replacement investments and the necessary write-downs, and to secure shareholder dividends. Since the merger in 2002, some CHF 500 million has been invested in mountain transport facilities and the artificial snow system, investments aimed at ensuring that the ski and excursion area has modern, high-capacity infrastructure and services.

Zermatt’s latest attraction, the new "Matterhorn glacier ride", is set to further enhance the attractiveness of the resort’s winter sports and excursion offering. The ultramodern lift, which is the world’s highest 3S cableway and has a carrying capacity of 2000 passengers per hour, is due to start carrying visitors from Switzerland and abroad to Trockener Steg on the Klein Matterhorn at the beginning of the 2018/19 winter season. The investment in this facility amounts to CHF 55 million and represents the highest single investment in the company’s history. The ceremonial opening of the new cableway of superlatives will take place immediately after the AGM in the presence of 500 guests.

At the AGM, CEO Markus Hasler gave a brief account of Zermatt Bergbahnen AG’s new pricing policy. The introduction of a dynamic pricing system for the forthcoming winter season comes in response to changes in consumption patterns and visitors’ purchasing behaviour. From the 2018/19 winter season onwards, instead of offering fixed ski-pass prices for the entire winter season, the price for daily and multiday passes will vary according to the seasonal period, volume of demand and capacity utilization at the ski resort. Zermatt Bergbahnen will focus on developing online sales. Those booking online will benefit from discounts of at least 5% compared with prices at the resort. Reductions of up to 25% are possible as part of special offers.

Every year the members of the Board of Directors are elected as part of the AGM. In accordance with the company’s articles of association, Hans Peter Julen, who has served for many years as Chairman of the Board of Directors, is stepping down from the board, having reached the age of 70. For 14 years as a member of the board of Rothornbahnen AG, then from 1997 as its Chairman, and for six years as a member of the board of Sunnegga AG and a further 17 years as Chairman of Zermatt Bergbahnen AG, Hans Peter Julen’s prudent and resolute leadership characterized by great passion and commitment, political flair and a pragmatic sense of what is achievable has brought the company considerable success. As befits a successful entrepreneur, Hans Peter Julen lined up his successor some years in advance. He is handing over to Franz Julen, for many years CEO of Intersport International. In addition, Hermann Joseph Biner was newly elected to the board. The shareholders appointed Hans Peter Julen as Honorary President.