After years of work, the restoration of the ‘Lorihiischi’ (Lori House) in Randa is complete. A celebratory opening took place on Saturday 10 August 2019. It will now be a living museum and is also available for events. 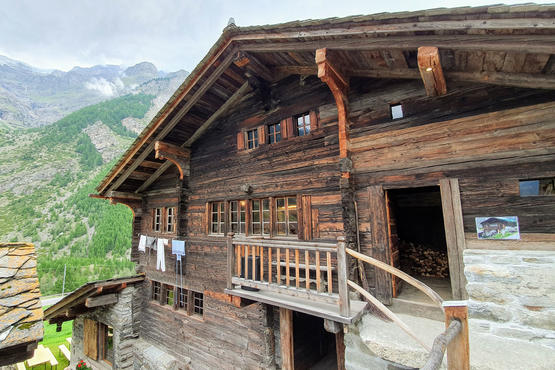 The ‘Lorihiischi’ (Lori House) stood empty for more than 30 years and was gradually falling down. Neighbour Hans Fux grasped the nettle and decided to save the house from becoming a ruin.

He wanted to preserve the Lorihiischi for posterity and enable current and future generations to see how homes used to be built and what life was like for their ancestors. After comprehensive renovation work, the house was opened on Saturday 10 August 2019.

In 2011, a charitable foundation was established and work to save the house began. Leo Jörger (President), Hans Fux, Heinz Brantschen and Thomas Truffer have worked tirelessly since then to turn the house into a perfect gem. They analysed the building materials and decided to renovate the house down to the last detail. This required an expert and they found him – Roger Aschilier. The joiner began his renovation work in 2013, supported by volunteers who contributed many hours of their time.

The Board of Trustees managed all the details, including planning and financing. They stayed within their budget of CHF 660,000, with the majority of the money coming from patrons, sponsors and friends. "We can be really proud of this," said Leo Jörger. The Board of Trustees would appreciate continued support, however, particularly as the work is not yet complete. Next to the Lorihiischi is a barn and a stable, which also need to be renovated. They are a great opportunity to expand the living museum.

Wooden wall dating back to 1268

"One of the wooden walls in this house has been dated back to 1268," said Leo Jörger. Some sections of the house are therefore older than the modern state of Switzerland. The year of construction has been officially determined as 1256. This makes the Lorihiischi one of the oldest surviving buildings in the Vispertal valleys.

Origin of the name

The previous owner, Lorenz Truffer, gave the centuries-old Valais house its current name, ‘Lorihiischi’. His daughters lived in the house in summer until 1985. In the winter, they lived in Täsch.

The Foundation is currently accepting requests for guided tours, visits and group meetings.