The Ludwigshöhe stands on the border between Switzerland and Italy. It is one of numerous peaks in the Monte Rosa massif, and the most southerly 4,000-metre summit in Switzerland. 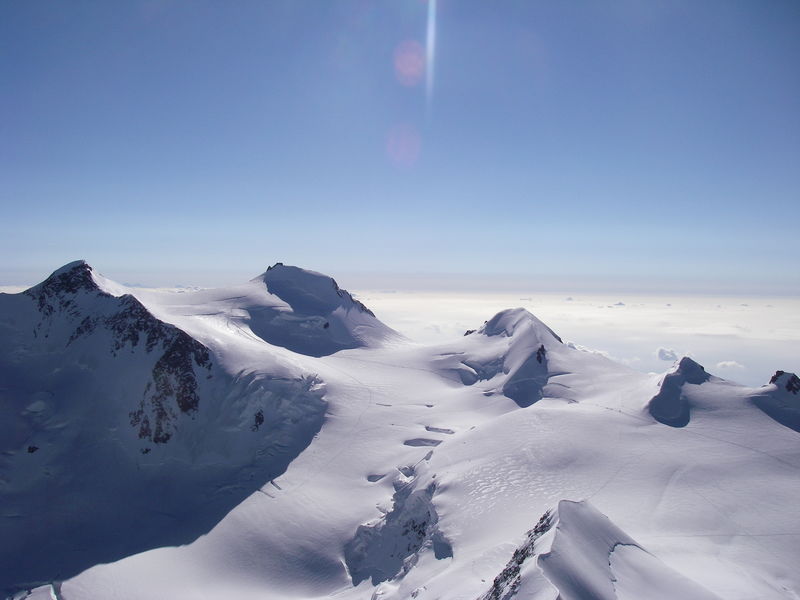 The Ludwigshöhe is one of the 4,000-metre peaks of the Monte Rosa massif (second summit from the right).

Multi-faceted border peak
The Ludwigshöhe is one of the ten 4,000-metre summits of the Monte Rosa massif. It stands on the borders between Italy and Switzerland, and between the Valle d’Aosta and Piedmont regions. On the Italian side, to the south-east, the mountain falls away steeply to the Ghiacciaio delle Piode. The Monte Rosa massif has about ten peaks above 4,000 m: Dufourspitze, Grenzgipfel, Ludwigshöhe, Nordend, Parrotspitze, Schwarzhorn, Signalkuppe, Vincent Pyramid, Zumsteinspitze.

History
The Ludwigshöhe was first climbed on 25 August 1822 by a team of surveyors for purely scientific reasons. Ludwig Freiherr von Welden, the Austrian general and topographer who led the expedition, named no fewer than eight peaks in the Monte Rosa massif. As was generally the case in the early 19th century, no names or scientific descriptions existed for these. Von Welden determined the location, name and height of the summits in words, pictures and on maps. He was also the first to draw up a map of the complete Monte Rosa massif.

Origin of name
The first ascent took place on the feast day of the canonised French king Louis IX (in German: Ludwig IX), who died on 25 August 1270. Ludwig von Welden gave this, rather than his own identical name, as the reason for naming the peak Ludwigshöhe, “Ludwig’s summit”.