A comfortable way of travelling to the top of the Matterhorn – that was the idea behind a project conceived at the end of the 19th century. Heritage conservationists, however, saw to it that the project never left the drawing board. In his book “Visionäre Bahnprojekte” (Visionary railway projects), Heinz Schild describes railway projects conceived in the turbulent times at the turn of the last century. 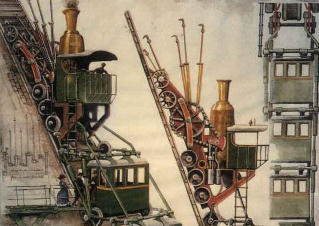 Heinz Schild’s book provides an insight into the railway euphoria that infused the end of the 19th and the start of the 20th century. It was the period of promoterism when there seemed to be no limit to the potential of modern technology. The book presents railway projects dreamed up all over Switzerland – those which made it and those which didn’t. Two railway projects were conceived for tourists in Zermatt. One of them turned out - the Gornergrat Bahn which is still one of the highlights of any trip to Switzerland. Up on the Gornergrat (3,100 m), the view of the Matterhorn (4'478 m) is absolutely breath-taking.

Railway pioneers doing it all

The railway pioneers of the 19th century had a great belief in themselves and in technology. The first Matterhorn rail project, dating back to the year 1890, was rubber-stamped by the federal councillors and received a licence in the same year. The project, totalling CHF 4.6 million at the time, was to bring passengers to the Matterhorn in stages.

However, the engineers did not reckon with the popular outrage their project elicited among the population in the valley and the heritage conservationists alike. The storm of protest, the very first in the young state of Switzerland, engulfed the whole of the country. The campaigns led by the heritage conservationists and the “Special Matterhorn commission” resulted in the submission of a total of 68,356 signatures against the planned railway. People became involved for “financial, moral and patriotic reasons”, so Heinz Schild in his book. The petition submitted by the Matterhorn railway opponents was based on the tenet that “the peaks of the Alpine mountains are the ideological property of the entire Swiss population and hence are not for sale”.
However, Heinz Schild does not limit himself to projects that never saw the light of day. He also gives an in-depth account of the railway lines that made Switzerland the popular tourist destination it is today. Among other interesting facts, he describes how 2,400 workers, most of them from Italy, built the Gornergrat Bahn.

The Gornergrat can be reached by funicular since 1898. However, even the project that did not turn out has been brought to life in Zermatt. Information boards providing details on the subject of the Matterhorn – among them the story of the unsuccessful Matterhorn railway project – line the themed Matterhorn Trail.

Information on the book