This ski mountaineering race, in which military and civilian participants conquer the Alpine route between Zermatt and Verbier, is said to be the toughest in the world. It requires not only exceptional stamina but also strong teamwork. 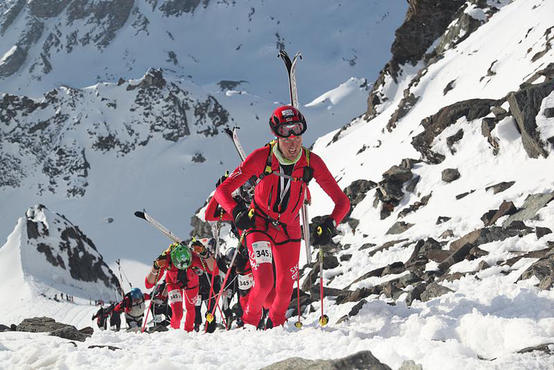 The incredible distance covered and huge altitude differences along the route make this mountain race truly amazing. The three-person teams start in either Zermatt or Arolla (shorter route). Extensive mountaineering experience is a must and participants must be physically, mentally and technically prepared for the competition. It is also essential that team members work as a unit as well as support the other participants during the race. Friendship, caution, recognising one’s own limits and respecting the mountains and nature are all part of the Patrouille des Glaciers.

Race Information
The Swiss Army has organised this historic race since it began. Teams comprise three athletes and one substitute. Both men and women who are over 20 years old in the competition year can start the race from Zermatt.

The Patrouille des Glaciers has two routes of different lengths. The long Route Z goes from Zermatt to Verbier and the shorter route A starts from Arolla. Both routes cover thousands of metres of elevation.

The start of the race, late in the evening in the village of Zermatt, is amazing. Athletes, all keen to begin the adventure, and spectators cheering on Bahnhofstrasse create a fantastic atmosphere. It's an emotional moment that's incredible to be part of.

Established tradition
The origins of the Patrouille des Glaciers lie back in 1943 during the Second World War. The Swiss Army was charged with defending the south-eastern region of the Swiss Alps. The objective of the course was to test soldiers’ stamina, dedication and perseverance. Two captains, Rodolphe Tissières and Roger Bonvin (who would later become a Swiss Federal councillor), set up this very special team race. The well-known "Haute Route " between Zermatt and Verbier was already an established route. This route normally takes four days to complete, but the aim of the Patrouille des Glaciers is to cover the distance in a single stage.

A tragic accident occurred during the third event in spring 1949. A military team fell into a crevasse on the Mont-Miné glacier between Arolla and Verbier and were only found eight days later. An event that had begun with such enthusiasm ended with tragic images. People in the region were so shocked that the Swiss military banned the event.

A smaller version of the Patrouille des Glaciers continued in the Lower Valais. The desire to re-start the event gradually grew, until permission was granted in 1983 to organise a new race.

Changes over time
Then as now, there are strict requirements to ensure participants’ safety on all sections of the Alpine route.

The increasing trend for extreme outdoor events has resulted in an ever-expanding field of participants. There is therefore now a multi-stage registration process, with priority given to Swiss military teams. The remaining places are then allocated to civilian teams. The number of three-person teams is limited to 1,400.