Over three hundred curlers always gather in Zermatt each year on the third weekend in January. They are meeting to compete for the Horu Trophy during one of the largest competitions in Europe, which takes place outdoors. 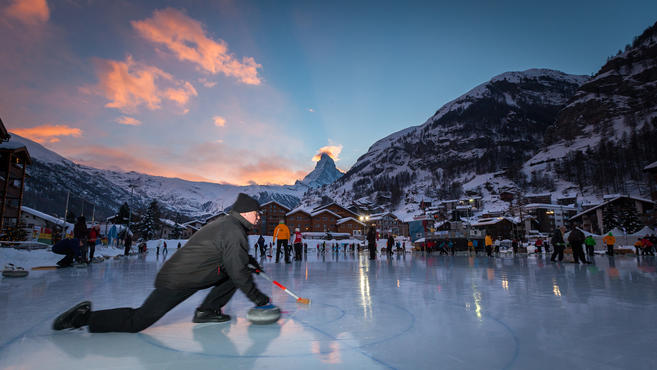 Information about the next Horu Trophy

Curling is considered a gentleman’s game. In the meantime, women naturally also compete with the standardised stone as it slides across the ice. Curling is not only a game of skill but also one where tactics play an important role. Therefore, curling is also thought of as "chess on ice." The word "curling" comes from the Old English word “curl” or turn – because the stone turns on the ice after it is released by the skip.

Curling began in Scotland in the Middle Ages. From Scotland, it spread to England, the United States, Canada and then to the European mainland. Curling is very popular in Switzerland. Both Swiss men and women have brought home international trophies. They include Patrick Hürlimann, Luzia Ebnöther, Mirjam Ott and Binia Feltscher. Many Swiss curling stars also have taken part in the Horu Trophy in Zermatt.

The first Horu Trophy was held in 1992. The word "Horu" comes from the local dialect and means Horn (horn). Horu is also the name the locals lovingly use for their commanding mountain, the Matterhorn. The mountain can easily be seen from the tournament’s ice in the middle of the village.

As is normal, teams of four players compete in the Horu Trophy. Because of the limited capacity of 19 rinks on two Zermatt ice rinks, no more that 76 teams can participate. This means that teams are unfortunately turned down each year, because the interest in the competition is considerable. Therefore, the number of players cannot be more than 304. Around 35 per cent of those taking part are women. The majority of all players come from German-speaking Switzerland, but also Scotsmen and those from other nations are honoured to be here.

During the welcoming gathering of the teams, it is clear that many of the players have known each other for some time, because many teams – and also many locals – take part in the tournament each year. Even though fun and games also count, the level of play of those teams, which regularly take part, is technically and tactically exceptionally high.

So that it is also very relaxed, a Zermatt Ländler group (Swiss accordion music) plays during the barbeque on Saturday. The peaceful gathering is also one of the highlights for many of the participants.

Curling – at home in Zermatt since a long time

There is a long tradition linking Zermatt with curling. Brought to the village along with their holiday baggage from the tradition-rich curling nations while on holiday, the sport found acceptance among the locals and spread among the guests so that it became very popular within a very short time. A curling hall was constructed in 1979. Since this building was demolished in 1998, open-air curling now is the game area in the village. The Curling Club Zermatt CCZ was founded in 1933, and is responsible for holding the tournament.

The Horu Trophy also attracts spectators, because many of them like to watch the tactics of the star players. The central ice, where the finals also take place, is located in something like a square arena. The spectators watch from a tribune and use the higher position to their advantage.

The price of admission for spectators is free of charge.