Freilichtspiele Zermatt: Open-Air Theater with a View of the Matterhorn again in 2017

The Zermatt Open-Air Theatre takes place at Gornergrat at 2,600 m every two years in July and August. In the summer of 2017, a surprising and completely new version of Livia Anne Richard’s "Romeo und Julia am Gornergrat" will be performed for the very first time. 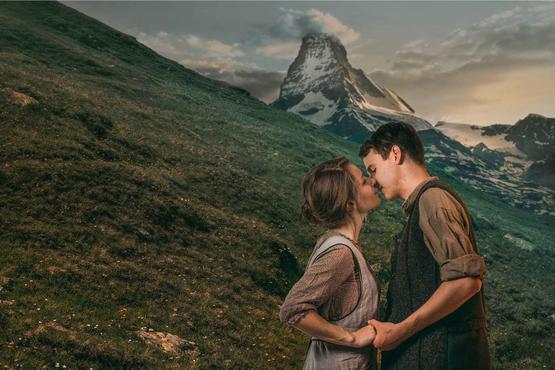 Livia Anne Richard is not unknown in Zermatt. In 2015, this writer and stage director and author launched the Zermatt Open-Air Theater at Gornergrat for the first time with "The Matterhorn Story". This was part of the events marking the 150 Years First Ascent of the Matterhorn in 1865. This staging attracted over 23,000 guests to this knoll with a view of the mighty and dominating Matterhorn. The performances in July and August 2015 were almost completely sold out. The story of the first ascent of the Matterhorn deeply moved the members of the audience.

Two Zermatt farm families each with a grudge,
Their despairing, enamoured children,
A headless puppet as a bad omen,
The parish priest, who sees what’s coming,
And tells the lovers a tale:
The story of Romeo and Juliet.
A homeless knife grinder with a great dream.
Will a new fate be carved
Out of a bad omen?
The Matterhorn: it knows – and clemently smiles.
Romeo und Julia am Gornergrat – a different story...

An Experience on the Mountain

There are open-air plays presented throughout Switzerland. But there is only one place, on Riffelberg on the mountain called Gornergrat, where the setting in the landscape is so impressive with a huge mountain panorama. The Matterhorn (4,478 m) enthrones the story 7,500 m away in the background – bearing witness to universal feelings in the summer of 2017.

The music specially composed for “Romeo und Julia am Gornergrat” comes from the Bernese musician Hank Shizzoe, who spent the last three years with the Swiss musician Stephan Eicher on the European Tour. Music and the mountain panorama melt together into a great theatre experience.