In November 2017, a new Igloo Village will be created in Zermatt at Rotenboden with a restaurant, outdoor bar, overnight accommodations, Whirlpool and the best view of the Matterhorn. This year, it will be mystical: ice artists create a snow palace with fortresses, castles and god-like formations. 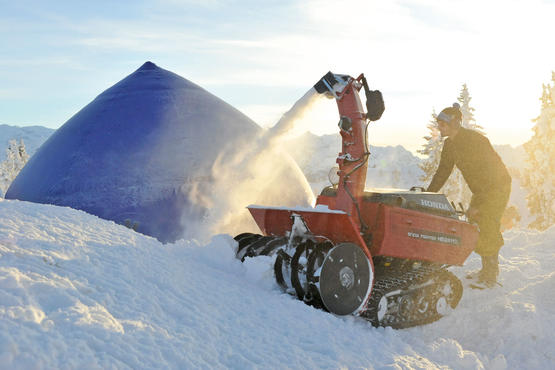 A creative snow-building team of ten people is ready: They will make the new Igloo Village at Rotenboden in Zermatt beginning 13 November 2017. 2,000 tons of snow is used to make the igloos. An amazing amount if one considers that this would fill 2 km of railway cars with snow.

The igloo builders form the snow into igloos with so-called balloon technology. On balloons with an 8-metre circumference snow is blown and shaped into snow huts. As soon as the basic forms stand, the artistic team takes over to lend the Igloo Village its unique appearance.

Nordic Mythology and the Gods

This year, the theme of the Zermatt Igloo Village is “Mythology.” Nordic myths and mythology, fortresses, castles, and the Gods are the focus. Jaimie Haselton, an American igloo artist with over 10-years of experience, is part of the artistic team.

On 8 December 2017, everything is ready. After 2,000 hours of work, the Zermatt Igloo Village opens its gates to visitors. Whether at the outdoor bar, over fondue, in the Whirlpool or for an overnight stay – the Zermatt Igloo Village is a great attraction with many visitors each year. This has much to do with the sunny and wind-protected location and the clear view of the sugar-coated Matterhorn.

There are eight igloo villages in Switzerland, Germany and Andorra. Zermatt has the most ancient and it is here, where the Igloo Village opens its gates the soonest.