Opening of the second section of the Zermatt Culture Trail

The second section of the Zermatt Culture Trail opened last Saturday, 19 June 2021. The section was opened to the public following a celebration ceremony and blessing by priest Stefan Roth. 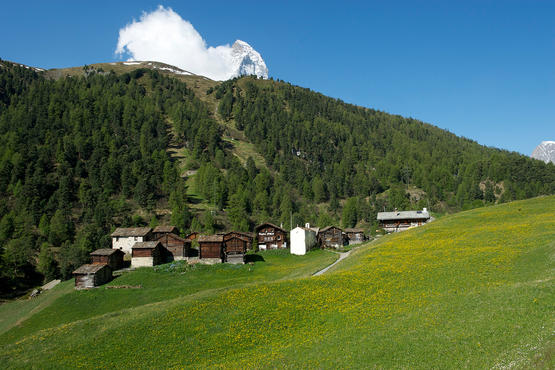 The association "Alts Zermatt" has set itself the task of making the historical treasures of Zermatt accessible to local residents, schools and visitors. Following the opening of the Zermatt - Zmutt Culture Trail in 2019 and a considerable amount of research work since, the second section was inaugurated last Saturday, 19 June: the hamlet of Zmutt.

The section was opened for the public following a celebration ceremony and blessing by priest Stefan Roth. At a total of 15 stations, visitors can learn about the construction of the buildings and the lives of the mountain farmers who lived in them. The highlight of the hamlet is a house made of building materials that can be dated back to 1212 using dendrochronology. The "Zmutt" section is now the second part of a cultural trail that will one day lead around Zermatt, bringing the cultural treasures of the region to life in an interesting way.

One of the oldest dated hamlets in Switzerland

Zmutt lies a good hour's walk from Zermatt and is mentioned in various documents as early as the 15th century. Until the late Middle Ages, Zmutt was an important stop on the mule track and trade route over the Valais Alpine passes. The hamlet that is visible today was built between about 1200 and 1600. Buildings added later used a log construction method to blend harmoniously into the village's appearance. New buildings or conversions in a different style have remained the exception. Zmutt, situated at an altitude of 1,930 metres, is not only the oldest settlement in Zermatt, it is also one of the oldest dated hamlets in Switzerland and the Alpine region. Although some buildings have disappeared, there are still five residential buildings that date from the late Middle Ages, in addition to many barn buildings.