The English Church St Peter’s is an important part of Zermatt’s history and traditions. It is closely linked to the British visitors who were among the first to want to see and experience the Matterhorn. 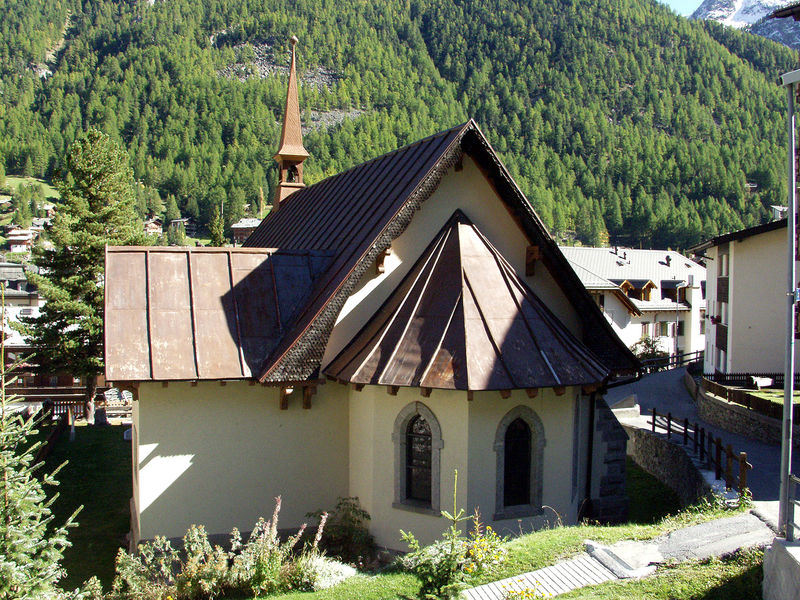 For Zermatt, the English Church occupies an important role in the resort’s history. Consecrated in 1870, the church also represents the “golden age of alpinism”. During the pioneering days of tourism in Zermatt in the 19th century, English guests made up the greatest share of visitors by far.

Plans for a church and the first ascent of the Matterhorn
From 1862, Protestant Sunday services for English-speaking guests were held in the Hotel Monte Rosa and the Hotel Mont Cervin. The first plans for the building of an English church were drawn up in May 1865, and a donation list was prepared at the same time. The two hoteliers Alexander Seiler and Joseph Clemenz were the first to add their names to this list, although they were both Catholic: a reflection of their ecumenical and cosmopolitan views. The same year, on 14 July 1865, the British climber Edward Whymper completed the first ascent of the Matterhorn. Of the seven men who reached the summit, only three returned to the village. Four climbers, including Lord Francis Douglas, Douglas R. Hadow and the Reverend Charles Hudson, fell to their deaths on the descent.

The tragic end to the first ascent of the Matterhorn did nothing to impede the initiative to build the church, but actually strengthened it even more. The Marquis of Queensberry, head of the family of Lord Francis Douglas, and the relatives of Douglas R. Hadow immediately made large donations. The foundation stone for the English Church was laid on 29 June 1869, only five years after the start of the donation list. The first service took place one year later, on 29 June 1870.

Poignant memorial plaques
There are numerous plaques inside this historic church in memory of mountaineers who had particularly close links with Zermatt and its mountains. The remains of the Reverend Charles Hudson are buried under the main altar.

Pastoral care for Protestant guests in Zermatt is provided by the Intercontinental Church Society. The clerics, who originate from England, are changed every two weeks and play an important role to this day. The Alpine Club of Great Britain celebrated its 150th anniversary in Zermatt in 2007. Naturally, a ceremony was held in the English Church.