The Matterhorn Gotthard Bahn connects many parts of the Swiss Alps with its railway network. Among other places, the train runs the route from Visp to Zermatt as well as the Furka and Oberalp car train. The shooting star of the company is the Glacier Express. 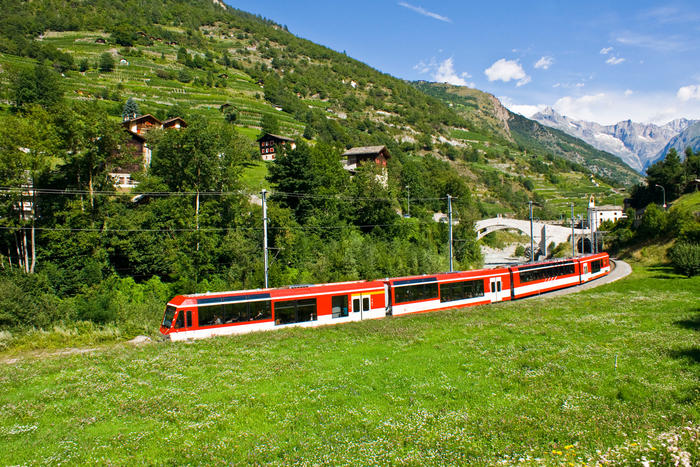 Matterhorn Gotthard Bahn (MGB) is owned by the BVZ Holding AG. It resulted from a merger between the BVZ (Brig-Visp-Zermatt Bahn) and the FO (Furka Oberalp Bahn). The merger took place in 2003. The MGB connects villages and towns in the heart of the Alps that surround the Gotthard Pass: Disentis, Andermatt, Göschenen, Brig, Zermatt. The Glacier Express runs from Zermatt to Chur, Davos and St. Moritz. This means that the train company serves passengers in three cantons: Valais, Uri and Graubünden. A total of 144 km of tracks, 29 tunnels, 20 galleries and 60 bridges. The longest tunnel is the Furka Tunnel with a length of 15.4 km.

The BVZ used the Visp-Zermatt railway line for the first time on 3 July 1891. Alexander Seiler (1819-1891) was a strong support of the company. The reason: He was a driving force for tourism in Zermatt as a hotelier (Hotel Monte Rosa Zermatt and the Seiler hotels in Zermatt). Because he had recognised the tourist potential of the Matterhorn. Ironically, the first trains travelled from Visp to Zermatt in the year he died.

The Gornergrat train is also part of the Matterhorn Gotthard Bahn. It is a historic masterpiece of railroad engineering from the 19th century. It began operations in 1898. Since 1929, the train also runs in winter. Its highlights: the staging of the Matterhorn during a trip from Zermatt (1,620 m) to Gornergrat (3,089 m).

Glacier Express, the Slowest Express Train in the World

The panorama train links Zermatt with St. Moritz, Davos and Chur. The first Glacier Express cars travelled this exceptionally attractive mountain route in 1930. Even today, the train remains very popular with foreign and Swiss guests. It passes over 291 bridges and through 91 tunnels. And here a treat for nostalgic train lovers: It is still possible for groups to reserve the antique train car and enjoy the bar, salon and piano player along sections of the Glacier Express.

The Matterhorn Gotthard Bahn maintains track sections which are very challenging. The engineers in the 19th century were pioneers in tunnel and bridge construction. Today, the work focuses on protecting the sections from floods, debris and rock slides in summer. In winter, keeping the tracks clean during heavy snowfall and ensuring the safety of the route are the primary tasks.