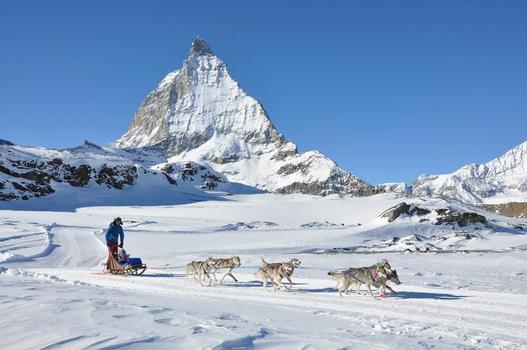 The marmots are hard at work

Nadine and Robi Perren’s little kingdom on Furi is getting ready for the winter season. At "Les Marmottes" all of the meat comes from the family’s own shoots or from their own barn. Game served in the cosy lounge is a hit with skiers. 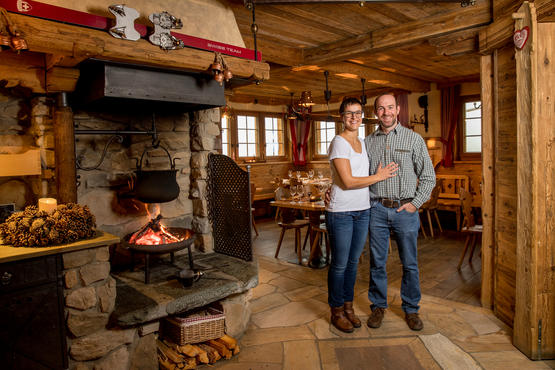 Passionate hunter Robi Perren pricks his ears at the sound of the marmots at the foot of the Matterhorn. Marmot is a speciality at "Les Marmottes". The cute little animals give the mountain restaurant at 1,900 m its name. The marmot sausage is delicious, as is the ragout whose preparation calls for dexterity, because every fibre of fat has to be removed from the meat. Only then is the dish easily digestible.

The aroma of freshly prepared Glühwein wafts from the copper kettle above the fire. Candles flicker on the windowsills. Grandmother’s underwear hangs over the table. Hunting trophies, old skis, harnesses and embroidery lend the best room its charm. Mountain hut romanticism in the ski area: stop three kilometres above Zermatt on Furi to enjoy an authentic atmosphere and good food.

Hosts Nadine and Robi Perren, both 35, swear by slow food. "In today’s hectic times, we made a conscious decision to slow down a gear." The landlord and lady’s motto is "to enjoy food, you need to know where it comes from". They not only know the family tree and names of their Eringer cattle, but also what the sixty Valais Blacknose Sheep eat during the summer on the Schwarzsee. Antibiotics? No chance. And the only fertiliser is manure. Pedro, a kind soul, looks after the animals in the barn during winter. The barn is also the favourite place of children Lucienne, 6 and Jean-Marie, 7. The youngest already has his own sheep. "It’s the only black one!" he says proudly. 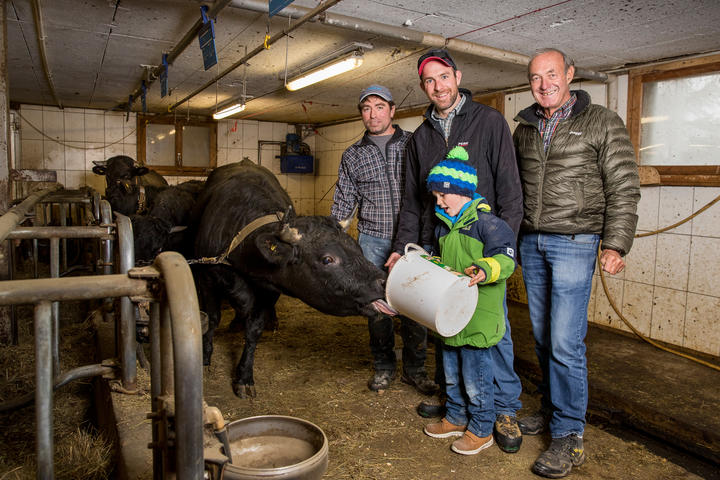 The Perrens are what you might call self-sufficient. When Robi started the business ten years ago ("I knew when I was just 16 that I wanted to have a restaurant up here") lobster and fois gras were still on the menu. He said ‘goodbye’ to that a long time ago in favour of juicy venison schnitzel and tender venison medallions. His hunting career began at seven when he shot his first chamois when out with his father. When the hunters shouted that they had killed something, the teacher called the mothers. That was not the case with her boy. He ran to the window at every shot, in the middle of lessons. What does Robi Perren think is the best part of hunting? The camaraderie? The shooting? Or the oldest of all hunting jokes, that it finally gives men peace from their wives? "We from the Valais are progressive in that respect", he says, laughing. "We have a huntswoman on our team. It’s the friendships and shared stories that count." He carries the game he has shot into the valley on his back, a journey that takes three hours. In the mini-butchery in the cellar of the mountain restaurant, everything, from skin to heart, is used. The Jagdteller (venison from roe deer and red deer, ibex and marmot) is the most popular dish with guests. Head chef Timo from Lörrach, who used to be in charge of the kitchen at Parkhotel Beau Site in Zermatt, adds: "The marmot sausage is not to be missed." All hell breaks loose at lunchtime, because three pistes and a footpath intersect in front of the building. There are toboggan evenings on Tuesdays and Thursdays - thanks to an extra run by Zermatt Bergbahnen. 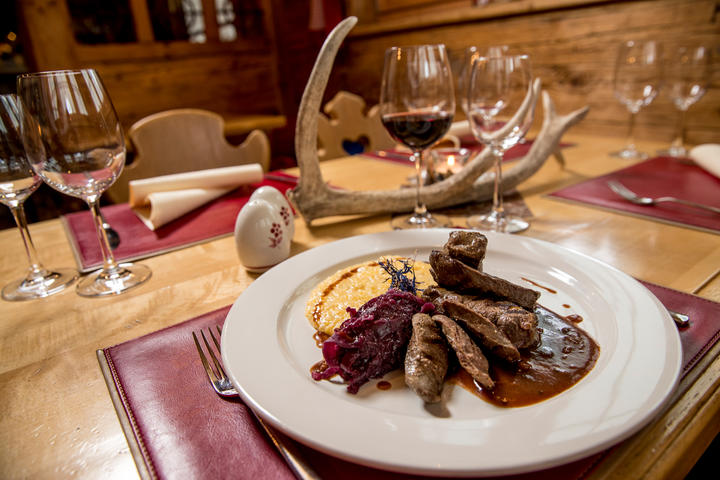 The Jagdteller with all kinds of meat, red cabbage and cheese polente.© David Birri

Robi Perren is a qualified chef. His parents ran Hotel Jägerhof in the village. He was a ski racer, ski instructor, mountain guide and mountain rescuer, but he gave all of that up when his children were born. Nowadays, he travels by PistenBully, instead of by helicopter: "it still gives you an adrenaline rush, but it’s less dangerous."His wife Nadine pulls the strings in the background. She has a great feel for staff, décor, menus and marketing. "I love this place. It’s a gift to be able to make our dream come true here." In 2007, the open-minded German came to visit her mother in Zermatt. She wanted to see the mountain landscape from above and roped in Robi to be a mountain guide for the Breithorn. That rope still binds them today. Jean-Marie was born after their wedding seven years ago. The baby of the family, Lucienne, followed two years later. The couple’s youngest baby is called ‘Tisch 8’. The bar and the kitchen of their second restaurant right next to it radiate a new glow since last winter.

The culinary concept stands out because of the quick and simple dishes, such as delicious stews or game chilli con carne. The project is close to their heart and is based on their private love story. Back then, at table 8 in "Les Marmottes" Luis Trenker, in his cinema poster, was not the only one beaming. It was also where Nadine and Robi first set eyes on each other. The attractive visitor from the Ore Mountains simply floored the equally attractive Zermatt man. Robi Perren didn’t give anything away, but hurried into the kitchen and told his colleages: "my future wife is sitting at table eight!" The winter fairy tale took its course. Sometimes life writes the most beautiful stories.