Together with their Italian neighbours, Valtournenche, Zermatt is planning to co-host men’s and women's downhill races. For the first time in the history of the World Cup, a race will take place over a national border. The route is special for several reasons, including the fact that it will be the longest, highest downhill in the World Cup. 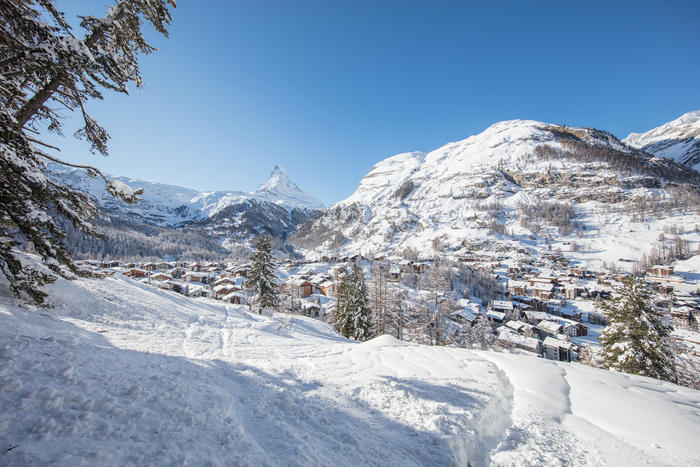 Due to the unexpected developments in the Lauberhorn downhill, there is considerable media interest in Zermatt’s World Cup plans. Daniel Luggen, Zermatt’s Director of Tourism, has however urged restraint: “It is not our intention to detract from Wengen.” Quite the opposite: “This traditional race is a key part of the ski race circuit and is vital for Swiss tourism and skiing as a whole.”

However, this approach does not contradict the intention of the Zermatt – Matterhorn destination to press ahead with their own World Cup plans, using their position as a leading ski resort to launch a new, innovative project that will boost the sport of ski racing. Working with the Italian resort of Valtournenche, Zermatt is planning to host cross-border downhill races, starting in Switzerland and finishing in Cervinia in Italy. It’s a kind of race around the Matterhorn, starting at 3,899 metres on the Gobba di Rollin above the Klein Matterhorn to Laghi Cime Bianche at 2,814 metres. Franz Julen, Chairman of Zermatt Bergbahnen AG and the driving force behind the project, says: “Hosting a skiing World Cup underlines our forward strategy; we want this race and we will do everything to ensure that it happens.” He also refers to the Alpine Crossing project, a CHF 150 million cable car link between Switzerland and Italy, currently under construction and due to open in autumn 2021. This will really open up the race area.

The idea for the race came from the neighbouring community of Valtournenche: “In the history of the World Cup, there has never been a race over national borders,” says the CEO of Cervino S.p.a, Federico Maquignaz. The plan is to host a men’s and women's downhill race every November, at the start of the season. The difference in altitude over the 5 km route is more than 1,000 metres, making it the longest World Cup route, and the highest. Most of the route uses existing, scenic glacier pistes. No significant construction is required to create the route, no trees need to be felled and the altitude means that it is snow-sure.

The project is strongly supported in the Zermatt – Matterhorn destination, with the ski club, hotels, cable cars, municipal communities and the tourism organisation all firmly behind the plans and the project’s strong chances of financial success. Initial discussions have already taken place with the FIS, the Italian ski association Fisi and Swiss Ski; reactions have been positive and encouraged all those involved to press forward with the project. “If everything goes to plan, we will ready for our first race in autumn 2022,” says Luggen confidently.