Light on the Matterhorn goes out - positive effect remains

During five weeks, Zermatt projected various images onto the Matterhorn in the evening. An initiative that was successful worldwide. 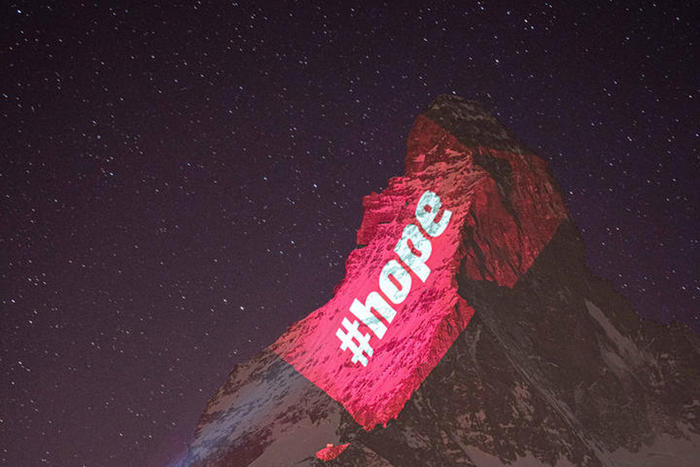 Light is hope: in this spirit, Zermatt had the Matterhorn illuminated every evening from 24 March 2020 to 26 April 2020. The images projected on the Swiss iconic mountain were words such as "hope", "solidarity" or "thanks", national flags and cantonal coats of arms, as well as symbols such as a heart, an earth globe or mountaineers reaching out their hands to one another. All in all, Zermatt projected over 80 images on its local mountain.

Signs of hope and solidarity

The aim of the campaign was to give people around the world a sign of hope in times of the coronavirus crisis, to show solidarity with those affected, and express gratitude to people who are helping to overcome the crisis. Each image was accompanied by a message explaining what a particular topic meant and why it was chosen. It was always about the people, never about political or economic backgrounds.

To implement the lighting, Zermatt could win over Gerry Hofstetter. Since 1999, the light artist has been transforming buildings, monuments, landscapes and mountains into temporary art objects.

The projections aroused interest worldwide and provoked reactions that overwhelmed the project’s initiators. Media reports achieved an international reach of over 700 million. Individual contributions on social media received up to 1.7 million likes. Opinion leaders around the globe shared the images of the illuminated Matterhorn in their social media channels - including Narendra Modi (Prime Minister of India), Sebastian Kurz (Austrian Chancellor), Alain Berset (Swiss Federal Councillor), Lee Hsien Loong (Prime Minister of Singapore), Stephen Tyrone Colbert (US satirist) or the Indian actors Ranveer Singh, Katrina Kaif and Anushaka Sharma. In response to the projection of the flag of the United Arab Emirates, the Burj Khalifa, the tallest building in the world, was illuminated with the Swiss cross.

There was also criticism, mainly and almost exclusively from Switzerland, focusing for instance on aspects such as light pollution and the disturbance of the fauna. However, no animals live on the Matterhorn, which invalidates this accusation. Moreover, the projections were limited in time and did not last entire nights. Also, the pictures with the strong colours are deceptive: they were the result of long-time illumination - from the naked eye, the projections from Zermatt could not be seen. As opposed to buildings that are shining for the same purpose, the Matterhorn was only illuminated with a projector, which results in much less bright light at the point of interest.

There were also voices stating that Zermatt would misuse the action for marketing purposes. The primary goal of the lighting was always to stir up solidarity and hope. Thus, no logos or marketing messages were projected. However, it is also clear that the images increased the visibility and attractivity of the Matterhorn. Ultimately, this initiative serves to promote tourism in Switzerland, the country’s economy and the well-being of all its people; it is therefore not only legitimate, but positive.

This lighting project will not create a precedent for further actions. The world is living extraordinary times - this is the only reason why the authorities have allowed the projections on the Matterhorn. Of course, Zermatt is well aware of the beauty and fragility of nature. Even without art, the Matterhorn remains beautiful and inspiring.

All in all, Zermatt draws a very positive conclusion. The goal of this initiative - to give people hope and courage, to show them a glimmer of light in dark times, to inspire and amaze - was achieved. With this illumination on the Matterhorn, Zermatt expressed care and solidarity felt by the Swiss people for a world facing testing times.

Taking into account the media coverage and the many positive feedbacks this initiative has received, it is probably one of the most positive actions with which Switzerland as a country has been able to win many sympathies abroad.

The light on the Matterhorn has now gone out. However, should the crisis rise against all expectations, the sign of hope will also light up again.