Passengers on the Glacier Express have been able to enjoy its new Excellence Class since 2019, with 4,855 experiencing the new product by the end of the summer. This translates as an occupancy rate of 55 percent – a result no one had expected. The pull of the new premium class has been accompanied by an increase in demand for the other two classes, with a complete facelift of both first and second class still to come. 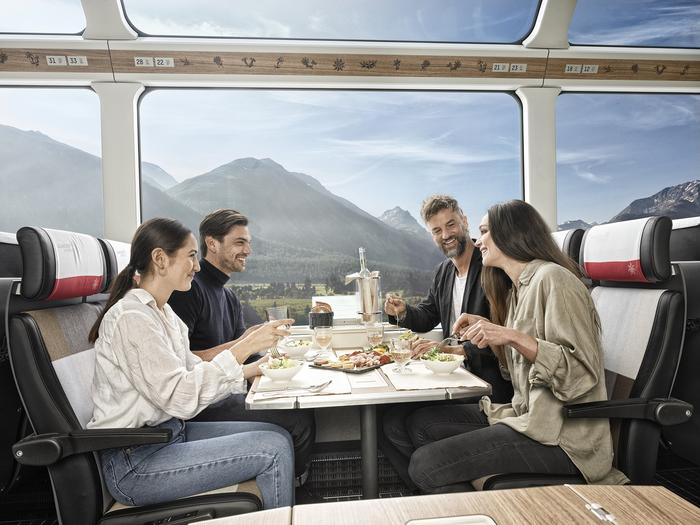 View out of the window from the new second class coaches. - © Glacier Express AG, Stefan Schlumpf

The Glacier Express has been on the fast track to success since the founding of the Glacier Express AG subsidiary by the RhB and MGBahn. After considerable increases in passenger numbers in the two previous years, the trend has continued, with figures now a third up on 2016. Following a very successful 2018/2019 winter season with trains often fully booked, demand in the summer season has proved equally buoyant. By mid-October, 250,309 passengers had travelled on the Glacier Express, 17,000 more than in the whole of the previous year. This points to 2019 potentially being a record year in the company's almost 90-year history.

The new Excellence Class is particularly popular with independent travellers. Some 80 percent of the 4,855 passengers – who come from all over the world – booked their seat online on www.glacierexpress.ch or using the railways' global distribution system. Package tourists tend to come from Japan, where tour operators are able to sell gratifying numbers of trips without having ever experienced the offer themselves. The feedback is consistently positive and the passengers are enthusiastic. The comfortable coaches and on-board gastronomy, primarily featuring Swiss products, are a success. Passengers appreciate the infotainment system, which provides information on the Glacier Express as well as on people and places along the way. The concierge service is singled out for particular praise. The Excellence Class has been nominated for Swiss Tourism's Milestone 2019 award, the results of which will be announced on 12 November. ”We are thrilled about both the nomination and our excellent passenger figures,” says Annemarie Meyer, Managing Director of Glacier Express AG.

Having gained a high profile in the international media, the Excellence Class is also exerting a positive influence on the demand for first and second class. Renovated coaches will start rolling out for these two classes when the winter season starts in December. The interiors will resemble the Excellence Class both in terms of design and technical standards. The Matterhorn Gotthard Railway and the Rhaetian Railway will be renovating all the coaches in their own workshops between now and summer 2021 without having to interrupt operations – quite a challenge in view of the consistently high demand for seats on the Glacier Express.