Cows are grazing at Riffelalp once again

The bells ring once again at Riffelalp. A group of interested people has founded a new Alp corporation. Now 25 cows and 7 calves graze on the alpine meadows at Riffelalp. Those initiating this effort want to uphold the Valais alp culture in Zermatt. 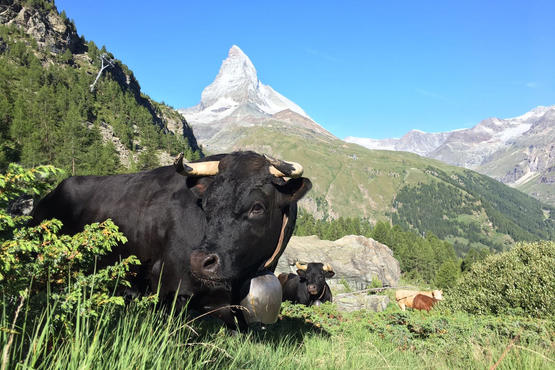 "Twenty-five cows and seven calves graze at Riffelalp this summer. What we would like to do is uphold the traditional Valais culture of Alpine farming," sais the initiator, Paul Julen from Tradition Julen, who is the largest sheep breeder in Zermatt. The newly founded corporation stands for Riffelalp Alpine farming corporation. The cows are from the Simmental breed (light brown and white), Evolèner (brown and white), original brown cows (light brown to beige) and Eringer (dark reddish brown to black), which are also known as fighting cows. Partners in the corporation are members of the Zermatt civil community, the Horu Käserei, Perren Andreas (Matterhorn Fleisch AG), Roland Ammann and young Zermatt families as well as from the Tradition Julen enterprise.

Since 15 years, no more cows have grazed at Riffelalp. Roland Ammann will now take care of the cows as the herdsman on Riffelalp. He works in the Tradition Julen enterprise (black-nose sheep breeding, milk products). The cows and steers are now considered "galt", which means in the local dialect that they do not produce milk. 16 of them will be slaughtered in early autumn. Their meat will be used to make the traditional Valais dried beef, which is then used by the members of the corporation and their families.