Zermatt has always been car-free; only electric vehicles are allowed. This applies to buses, too. The first e-bus arrived in Zermatt thirty years ago – an incredible achievement that will be celebrated on Saturday 21 July 2018. 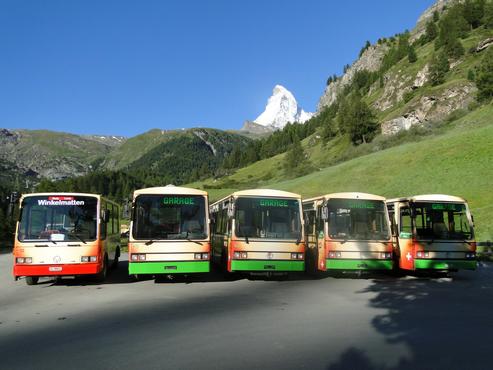 Other Swiss cities have only recently upgraded their buses to electric power, but in Zermatt they have been around for thirty years. "At the time, it was really unusual. Apart from Zermatt, only a few other places in the world had e-buses", says Beat Bürgin, Technical Director of Elektrobus in Zermatt. There will be a special celebration on Saturday 21 July 2018 to mark the anniversary.

The first electric low-floor buses, with space for 50 passengers, arrived in Zermatt in January 1988, and transported locals and guests to all the Zermatt mountain railway valley stations. Today, Zermatt has ten e-buses covering two routes, each capable of holding between 30 and 80 passengers. On one of the routes, battery power is sufficient for a day's journeys, whereas on the second route, the buses have to manage a 16 per cent incline. "This requires considerable power from the batteries, so after four or five return trips they need to be replaced with fully charged batteries," says Beat Bürgin.

The buses are recharged at two locations in the village, and overnight. The bus company uses around 120,000 kW of electricity per year to charge the batteries. All of this is generated by hydroelectric power, as the many glaciers and lakes provide Zermatt with huge water resources that can be used to produce clean energy.

Zermatt’s e-buses are not cheap with each one costing CHF 650,000. This makes them much more expensive than buses with diesel engines, but the price is justified, as every single bus is unique, custom-made for Zermatt’s narrow streets. The buses are made by Vetter in Fellbach (Stuttgart) and STIMBO in Zermatt.

A glimpse of the future

"The only innovative changes we’re expecting are regarding energy storage. We’re really hoping that more research will produce more powerful batteries and, in particular, will reduce their weight," says Beat Bürgin. The current batteries weigh 1500 kg, need to produce sufficient power and not be impacted by the cold, bumpy, snowy roads.

Zermatt has always been car-free. Zermatt residents have reconfirmed three times that it should stay this way – in polls in 1961, 1972 and 1986. Almost 500 electric vehicles are permitted in the village, including around 40 taxis. They all travel at a maximum speed of 20 kilometres per hour. Quiet, slow, emission-free travel is highly valued in the Matterhorn destination. 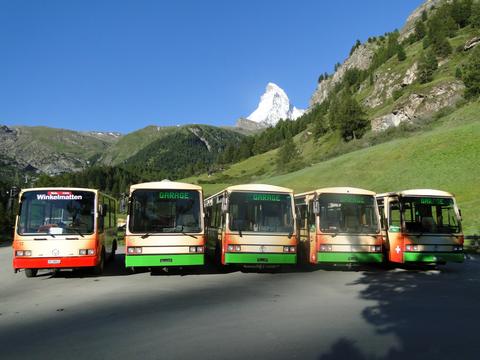 Today, Zermatt has ten e-buses covering two routes, each capable of holding between 30 and 80 passengers. 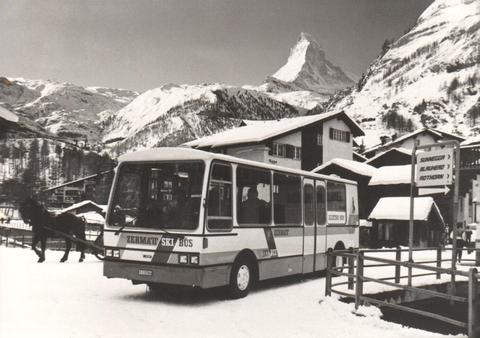 The first e-bus in Zermatt started operating as a ski bus in January 1988. In 2013, it was replaced by a bus from local firm STIMBO. 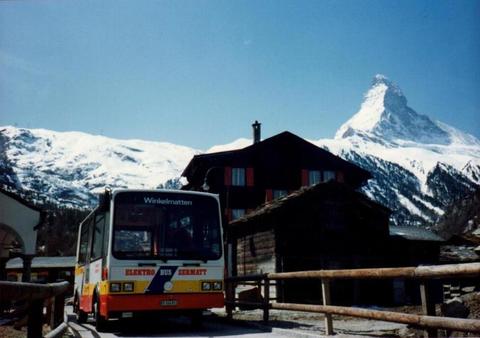 The first bus to operate on the second route was fitted with two engines to enable it to manage the 16 per cent incline on the route.