In November 2018, a new Igloo Village will be created in Zermatt at Rotenboden with a restaurant, outdoor bar, overnight accommodations, Whirlpool and the best view of the Matterhorn. This year, it will be adventurous: ice artists will create a snow palace featuring wild animals out of snow and ice. 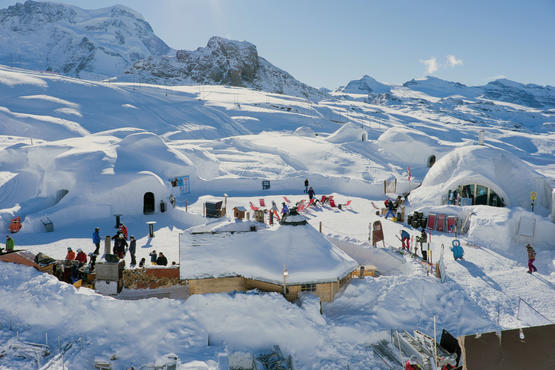 A construction team of 10 people is on stand-by: the creation of the new igloo village at Rotenboden in Zermatt starts from 13 November. Constructing the igloos will require 2,000 tons of snow. That’s a considerable amount – equivalent to a 2-km long railway car filled with snow.

Daniel Wunderlin now holds the reins for the snow hotel in Zermatt. Ten years ago he moved from Aargau to the Zermatt mountains as a ski instructor. Daniel started in the igloo village as an igloo guide; he has helped in the igloo construction and was also part of the world record team. The largest igloo in the world was constructed at Rotenboden in 2016, in around 2000 hours, from 1387 blocks of snow. Now Daniel Wunderlin is taking charge of the entire snow hotel. He is delighted that most of the old igloo team will be there again this year. "It’s certainly going to be an exciting winter for me and for the guests," he says, looking forward to the arrival of the first visitors.

New managing director Daniel Wunderlin loves adventure – not just in his new job as igloo managing director in Zermatt, but in his spare time too. So it's probably no coincidence that the artistic theme in the Zermatt igloo village this winter is "Out in the Wild". To be fair, however, the decision on this year’s theme was made during Daniel's absence: he was on a track in the Alaskan wilderness and couldn’t be contacted. Making a virtue out of necessity, the art theme "Out in the Wild" was chosen there and then. It’s bound to delight the igloo guests, who won't have to travel to Alaska to find themselves in the wilderness. And luckily for young and old, these snow bears won’t be dangerous either.

So what is a packraft? Daniel Wunderlin is guaranteed to know the answer. Last summer, he was abandoned for a week-long trip in the midst of Alaska's wilderness – equipped with just a 20 kg rucksack, some food, a fishing rod and a packraft. A canoe weighing just 2.5 kg, a packraft can be used to cross rivers and small lakes. For emergencies, Daniel also had a GPS device that sent a daily signal. It kept people informed about his location and could also send SMS messages. Luckily, no SOS message was required. But it was still a real adventure – even for someone with lots of outdoor experience.

On 14 December 2018, everything is ready. After 2,000 hours of work, the Zermatt Igloo Village opens its gates to visitors. Whether at the outdoor bar, over fondue, in the Whirlpool or for an overnight stay – the Zermatt Igloo Village is a great attraction with many visitors each year. This has much to do with the sunny and wind-protected location and the clear view of the sugar-coated Matterhorn.