The Folklore Festival in Zermatt is back!

After a two-year break, the Folklore Festival is back with a brand new image. 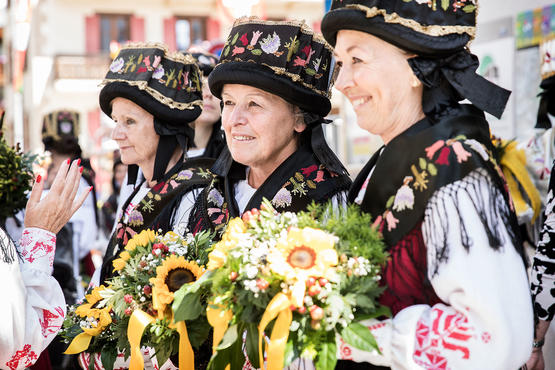 Zermatt is fully dedicated to Swiss tradition when the Folklore Festival in August transforms the village into a colourful, cheerful backdrop for costumes, dances and music. The highlight is the large parade along the Bahnhofstrasse.

What started in 1969 as a small parade has become the largest cultural event of the summer in Zermatt. Different Swiss folklore clubs and groups display their traditions with music, traditional dress, dances and colourful costumes from a nostalgic age. The highlight is a major parade through Zermatt. There will also be music and dance presentations, children’s activities and games as well as refreshments. The entire proceeds from this year’s event will be contributed to the Zermatt Youth Fund. Every franc raised will help the youth in Zermatt to fund a variety of local projects.

After a two-year break, the Folklore Festival is back with a brand new image. The organising committee has used the downtime to rework the concept and to reposition the festival. One of the largest cultural events of the summer will return to its roots, with the number of associations taking part limited to 30 groups in the future. The procession will also move from its previous Sunday afternoon slot to take place on the Saturday afternoon. The theme of nostalgia will also play a prominent role in the event. On Sunday, a variety of groups will perform their music on the mountain and in the village.

The festival parade starts at the train station, continues along Bahnhofstrasse to the church and then crosses the Kirchbrücke to the other side of the Vispa river. The party continues along Steinmattstrasse, before heading over the bridge to the jetty and finally to the Obere Matten fairground.

The parade is filled with people in traditional costumes, drummers, yodelling choirs, marching bands and other musical groups, folk dancers, flag wavers, the Grenadiers of God, as well as musicians playing hunting horns, alpine horns and cowbells. Guests from all around the world visit Zermatt to witness this lively celebration of Swiss culture.