Ski speed athletes are set to start the World Cup season at the foot of the Matterhorn in the future. A cross-border project is taking shape to make the vision a reality, involving the Italian Winter Sports Federation (FISI) and Swiss-Ski with the tourist destinations of Zermatt and Cervinia. The first World Cup speed opening in Zermatt/Cervinia could be held as early as autumn 2023. 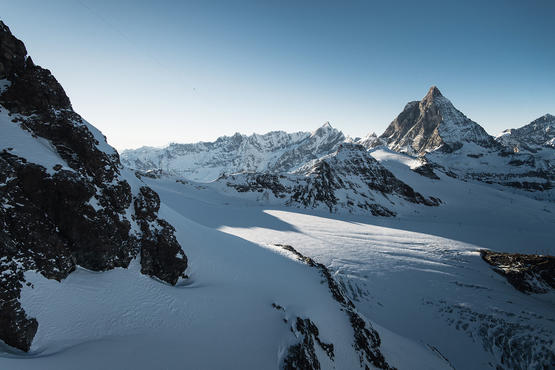 The idea of holding World Cup races at the foot of the world-famous Matterhorn is not new. But the new 3S lift from Testa Grigia to the Klein Matterhorn, currently under construction, will make it a possibility from 2022. The project is now gaining momentum; various meetings have already been held between representatives of the FISI and Swiss-Ski as well as the cable car and tourism organisations. Under the direction of the piste architect and 2010 Olympic downhill champion Didier Défago, who designed the courses, walk-throughs with Bernhard Russi and the two FIS race directors took place in the Matterhorn region this spring.

The races on the Matterhorn would be the first cross-border event in the history of the World Cup – starting and finishing in different countries. The men's downhill race would start at Gobba di Rollin (3,899 m) in Switzerland, with the finish line at Laghi Cime Bianche (2,814 m)
in Italy – making it the highest descent in the world. The ski area on the Theodul glacier is now the only option for year-round skiing.

Alongside the two ski associations FISI and Swiss-Ski, the key stakeholders involved in the "The Matterhorn World Cup" project are Bergbahnen Cervinia and Zermatt Bergbahnen AG, the tourism and skiing destinations of Cervinia and Zermatt, the autonomous region of Valle d'Aosta and the canton of Valais, as well as the municipalities of Valtournenche/Cervinia in northern Italy and Zermatt. All the participants are highly motivated to play their part in ensuring this visionary concept can become a reality. Representatives of these stakeholder groups are planning an innovative organisational approach for this potential new event within the Alpine Ski World Cup.

Under the leadership of FISI and Swiss-Ski, the project planners envisage speed races for men and women will be held at the foot of the Matterhorn on two weekends at the end of October/start of November. Test races are anticipated in 2022 with speed races possible for the first time in 2023 if plans proceed as expected. No World Cup races have yet taken place between the World Cup opener in Sölden in mid-October and mid-November, which means there is no existing venue competition.

FISI President Flavio Roda explains: "This is primarily an opportunity for the entire ski world, rather than a project for two countries. After all, it offers a great opportunity to hold an international World Cup speed opening in the future. Italian winter sports will do all it can to play its part."

"The races on the Matterhorn would bring numerous advantages for skiing. On the one hand, it could shorten the gap between the start of the World Cup in Sölden and the first speed races; and on the other hand, it would provide speed athletes from all over the world with the best training opportunities in the heart of the Alps at the start of the season," adds Urs Lehmann, President of Swiss-Ski.

Councillors Luigi Bertschy and Jean-Pierre Guichardaz welcome the development: "We are delighted that the cross-border project we have been working on for the last few months, together with FISI, Swiss-Ski, Cervinia and Zermatt, is becoming a reality. Hosting the World Cup on the Plateau Rosa is a challenge that we are excited to meet. It offers a great opportunity for cooperation with Switzerland and the two ski associations. It also provides us with the opportunity to present our region to a wide audience. Over the coming weeks we will continue to work and finalise the details of the event and our involvement in the organising committee."

"The two tourist destinations of Zermatt and Cervinia have been operating a joint ski area for many years. This project brings us even closer together: a sporting event like this is something unique and fantastic for Switzerland as well as for Italy. The close cross-border cooperation shows the additional opportunities that exist in the Matterhorn region for both countries," says Herbert Tovagliari, Chairman of the Board of Directors of Cervino SpA.

Franz Julen, Chairman of the Board of Directors of Zermatt Bergbahnen AG, highlights the planned organisational approach and the region's snow reliability: "No other place can host speed races so early in a World Cup season as the Matterhorn glacier in the border region between Italy and Switzerland. The necessary infrastructure already exists to a large extent, which makes this event an excellent example of sustainability. Collaboration with the two national associations is very constructive and the organisational approach that has been envisaged is as innovative and visionary as the whole project."

FISI and Swiss-Ski are confident that speed World Cup races for women and men in the Matterhorn region will be included in the FIS long term calendar as soon as possible.