On 8 August 2021, the traditional Valais annual cow fighting festival took place in Zermatt for the second time. Around 100 Eringer cows fought for the title of "Reine du Cervin" 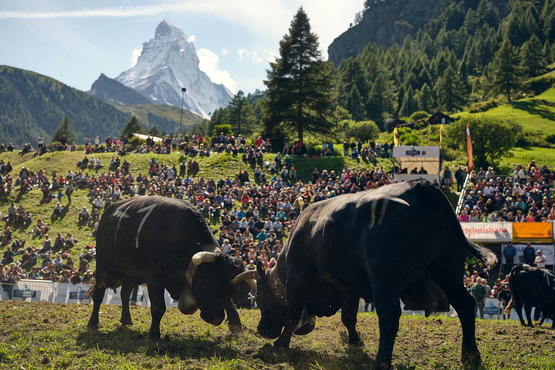 This scene, first experienced in 2018, made its return on 8 August 2021. The Upper Valais summer Ring Cow Fight, known as the ‘Sommerstechfest’, was coming to Zermatt for the second time. Around 100 Eringer cows fought for their place in the herd’s hierarchy, as they do naturally, to earn the title of ‘Reine du Cervin’. All in the Matterhorn Arena on the far side of Zermatt with the majestic Matterhorn in the background.

Cow fighting goes back years in the Valais region. As the name suggests, the fights are between Herens cows and, in contrast to bull fights, normally end without any injuries. The fights are the breed’s natural way of selecting the herd’s leader. The tournament is run by the livestock breeding association EVZG Nikolaita.The proceeds from the ‘Reine du Cervin’ are used to sustainably maintain the infrastructure of Zermatt Alpine associations.The traditional "Reine du Cervin" event was only known to a small group of specialists in the past.  Zermatt Tourism used the event that first took place in Zermatt in 2018 to emphasise the Swissness of the Zermatt Matterhorn destination for national and international marketing purposes.

The web series for the cow fighting event allowed the tourism organisation to generate publicity in a sustainable way. The involvement of regional and national celebrities, including Beatrice Egli, Marc Trauffer and Genderbüebu, made it possible to extend the region's reach via social networks and other media outlets. The decision to use a video format to market the traditional event has proven successful. The tone and imagery are playful and funny, showcasing the beauty of Valais and its traditions alongside the international aspect of this tourist destination.

The "Reine du Cervin" anthem that was specially composed for the cow fighting event by the Valais Swiss accordian quartet Genderbüebu, also shows how to make an innovative project appealing to a wider public. The song shot straight to number 1 in the Swiss Artist Single Charts, putting it ahead of all the other famous international artists.