Norah Jones, Emeli Sandé, Kodaline, Sarah Connor, Jack Savoretti, and many other great artists: The main program of the 11th Zermatt Unplugged, which takes place from April 10 - 14, 2018 has been confirmed. Advance ticket sales for all ticket categories start on December 15, 2017. 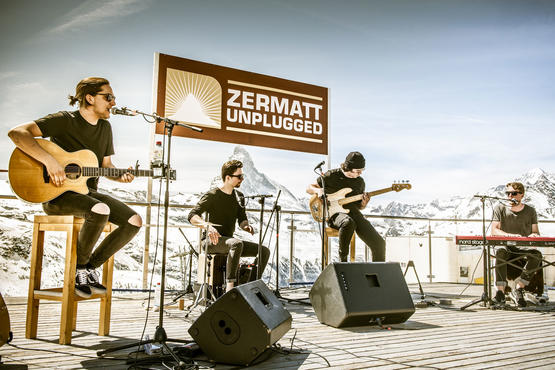 Kodaline will open the 11th Zermatt Unplugged on April 10, 2018. The Irish alternative rock band is currently working on their third studio album and had canceled all concerts in Europe on short notice. Zermatt, however, stands. Like Kodaline, other world stars will not pass up the appearance at the beautiful festival in the Swiss mountains. Zermatt Unplugged 2018 could be called in good conscience the festival of powerful voices. And as a festival of great singers: Norah Jones, Emeli Sandé, Sarah Connor, Selah Sue and Lianne La Havas are five great artists with unmistakable voices on the Zermatt stages. Also unique are the voices of Jack Savoretti and Jake Bugg, both of whom will per-form in Zermatt on Friday. With The Kooks comes a band to Zermatt that has inspired a whole generation of musicians. Mighty Oaks has a very special relationship with Switzerland. After their concert in Zurich fans in Switzerland quickly became their favorite audience. The main program of Zermatt Unplugged is completed with Hudson Taylor, Amber Run, Brett Dennen, Dabu Fantastic, Blanco White, and Fetsum and Wintershome, who will celebrate the release of their first album in front of their home audience.

New for the festival in 2018 is an "Unplugged Pass" for all visitors who do not have a concert ticket for the main concerts. This replaces the previous Festival Pin and costs CHF 30.- per day (CHF 50 .- / week). In addition to access to the Taste Village and the Foyer marquee, the Unplugged Pass includes entry to the "Newcomer" (side stages) concerts, the "Breaking Acts" (Vernissage), the «Artist in Residence» (Hotel Schönegg & Foyer marquee), Ronnie Scott's All Stars (Gandegghütte / Hotel Alex / Mont Cervin Palace), and the after parties (Vernissage / The Alex / Heinz Julen Shop / Ferdinand). For the anniversary edition in 2017, the Taste Village was created as a new festival center and a place of musical and culinary encounters. And with great success. "With the Taste Village we managed to create a central meeting point where visitors can spend hours on end, listen to newcomers, fry the cervelat sausage in the tradition of authentic Switzerland, and taste all the delicacies that Taste Village partners have chosen for guests of Zermatt Unplugged," says Rolf Furrer. It quickly became clear that the pilot project from 2017 demanded a continuation. Also in 2017, atmospheric concerts in the Winkelmatten chapel, intimate hotel concerts under the banner "Artist in Residence", and spontaneous sets of "Pop up Artists" on the streets of Zermatt were performed for the first time. These formats will also continue after great success.

Advance ticket sales for all tickets will start on December 15, 2017 at 12 noon. Members of the Zermatt Unplugged Club have the opportunity to purchase tickets exclusively starting 48 hours earlier (December 13, 2017, 12 noon). Single tickets for the respective concerts as well as festival passes and packages including overnight stays and hospitality are available. Advance ticket sales are available at www.zermatt-unplugged.ch. The program of the secondary stages will be announced at the end of January.