Jubilee Celebrations at the Matterhorn: 100 Years of the Solvay Bivouac

The Hörnligrat on the Matterhorn is the route most taken by Alpinists, who want to reach the summit. The Solvay Bivouac has been available for climbers in distress since 1917. The little hut at 4,003 m turns 100 years old on 8 August 2017. A retrospective. 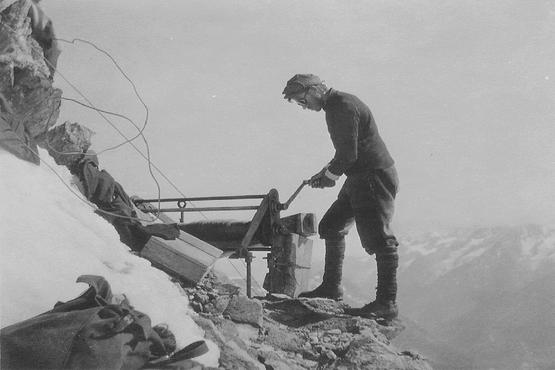 The Solvay Bivouac is still called the Solvay Hut even when it is not a hut with infrastructure but really just a bivouac. This protective structure is still used by climbers on the Matterhorn who are in distress on the mountain because of a sudden change in the weather or some other reason.

Some famous Alpinists, authors and bankers were responsible for making sure with donations that this bivouac was built. The patron of the bivouac was the Belgian chemist, philanthropist and mountain climber Ernest Solvay. Over 100 years ago, he contributed 20,000 Swiss francs, which was a considerable sum of money at that time.

The architect for the Solvay Bivouac was Philippe de Kalbermatten. A great deal of time passed before the bivouac could be dedicated because there were first disagreements and later World War I, which interfered with the plans. Beginning in the summer of 1915, the very costly and complex material transport from the valley by mountain guides and porters could begin. A small and archaic cableway transported the construction material in seven stages from the Hörnli Hut to the building site 800 m higher. On 8 August 1917, it was finally possible to dedicate the bivouac, unfortunately without the patron, Ernest Solvay, who was not able to travel from Belgium because of the world war chaos.

Celebration with the Descendants of Solvay

On 8 August 2017, the Solvay Bivouac will be celebrated in Zermatt in a simple, private ceremony. The descendants of Ernest Solvay will be present along with dignitaries from the SAC Central Section Bern. The Central Section Bern has only one "hut" it calls its own: the Solvay Bivouak. Representatives from Zermatt will also be present including members of the Burgergemeinde, the Zermatt Rescue Station and from the Yeti Club.