A première with a breathtaking backdrop, a moving and emotional story and a delighted audience. The world première on 11 July 2019 of MATTERHORN: NO LADIES PLEASE! was a complete success. The play by Livia Anne Richard is being performed on Europe’s highest open air stage, at 2,600 metres above sea level, until 1 September 2019. Musical accompaniment for the Zermatt Open Air Theatre 2019 is provided by world-renowned alphorn player, Eliana Burki. 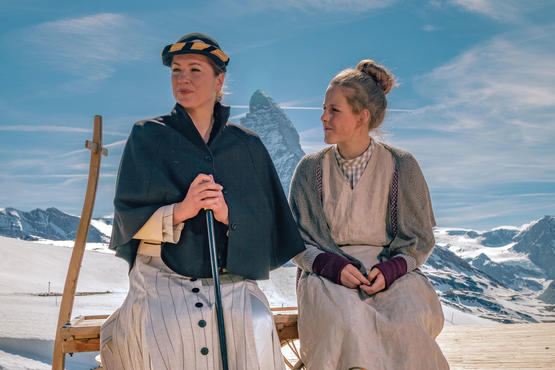 At 2,600 metres above sea level, surrounded by the majestic Alpine landscape and right in front of the Matterhorn, the world première of the open air theatre production MATTERHORN: NO LADIES PLEASE! took place on Thursday 11 July. The weather for the première was ideal and the 700 guests clearly loved it. The emotional story really moved the audience.

In 1871, almost exactly six years after the first ascent by Edward Whymper, Lucy Walker, a 35-year old experienced mountaineer, has a goal: she wants to be the first woman to climb the Matterhorn. However, this rebellious young woman's plan is met with resistance from all sides. The American Meta Brevoort is also on her way to Zermatt with exactly the same plan. Walker has to combat her parents’ opinion, her status and position and all the prejudices that women faced at that time. During her stay in Zermatt, Lucy Walker gets to know Lina, a young girl from Zermatt. Just as Lucy has been brought up in line with the conventions of the English aristocracy, Lina has grown up with the traditions of the mountain village. A wonderful friendship develops between the two women, who could not be more different, yet they both dream of freedom. The freedom to be a fully-rounded individual in society and not ‘just’ a woman.

Under the leadership of director Livia Anne Richard, the 24-strong cast has been rehearsing since February. Professional actor Corinne Thalmann and young Valais talent Tina Maria Müller play the main roles of Lucy Walker and Lina Seiler.Lucy Walker's close friend and long-time mountain guide – Melchior Anderegg – will be played by professional actor Roman Weber, who appeared on the Zermatt stage in both 2015 and 2017. Many actors who have appeared in previous Zermatt Open Air Theatre productions will also join the cast, including Amandus Forno, Helmut Williner, Nadine Summermatter and Beat Zumtaugwald.

The venue is part of what makes the Zermatt Open Air Theatre such a unique theatrical experience. The simple stage blends almost seamlessly with the mountain landscape. The Matterhorn reigns majestically over the set, creating a constantly changing backdrop. The natural set offers director Livia Anne Richard a welcome challenge: "For me, there is nothing more beautiful. You feel very small here, part of nature. You have to accept the directions it gives you." The play will be performed every week from Thursday to Saturday at 19:30 hrs and on Sundays and 1 August at 15:00 hrs, until 1 September 2019.

Eliana Burki on the alphorn

Live musical accompaniment for the Zermatt Open Air Theatre 2019 is provided by world-renowned alphorn player, Eliana Burki. She is a professional musician and alphorn player from Solothurn, whose experimental alphorn sounds challenge musical taboos. With her combination of the modern and traditional, her music embodies the spirit we see in Lucy Walker – a passion that will not be curbed despite the prejudices of others.

Tickets for performances are available in Classic and Premium categories, with a return train ticket to the Riffelberg included with every ticket. There will be extra trains back to Zermatt after the performances. Packages including hotel accommodation are available from Zermatt Tourismus. The play will be performed in all weathers provided it is safe. However, warm, waterproof clothing is recommended. Languages spoken in the play include German, Valais German and English, but even if you only understand one of the three languages, you will still be able to follow the play. Written scene descriptions are available in French, Italian and Spanish and audio guides are available for French-speaking guests. These guides take you through the play using spoken scene descriptions.