"Gran Becca": The new course in the World Cup calendar

The first cross-border race in the history of the Ski World Cup will be held on the "Gran Becca" course. The run, which starts on Gobba di Rollin above Zermatt in Switzerland and finishes in Laghi Cime Bianche above Cervinia in Italy, stretches over four kilometres and almost 1,000 metres in altitude. Two Europa Cup races are planned to be held initially in autumn 2022, followed by the World Cup races for the first time in autumn 2023. 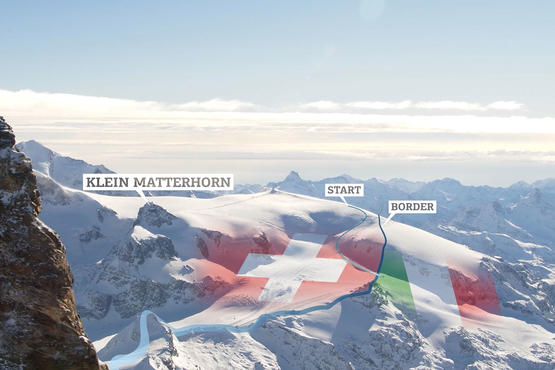 The Matterhorn/Cervino World Cup races will be the season opener for speed athletes. These early-season races mark a unique development in the FIS Alpine World Cup calendar: starting in Zermatt in Switzerland and finishing in Cervinia in Italy, they showcase the new, innovative ideas being incorporated into the Alpine World Cup in the future. They bring the speed racing season forward, enabling the athletes to start around three weeks earlier. "In addition, we are also providing all teams with three weeks of training opportunities in the run-up to the races and are prepared to host Europa Cup races. This concept will benefit skiing as a whole," says OC Chair Franz Julen.

"Gran Becca": a spectacular run with views of the Matterhorn

The course, which starts at 3,800 metres above sea level and finishes at 2,865 metres above sea level, was designed by Didier Défago, 2010 Olympic downhill champion. Covering 935 metres of altitude over four kilometres, the maximum speed is around 135 km/h. "In addition to the unique panorama, the unspoilt nature and of course the view of the Matterhorn, the course itself is also impressive: we have created a downhill run that has everything – from jumps to long turns and gliding sections to speed elements, it doesn't leave anything out," says the 44-year-old Valais native. All the athletes will tackle the same piste, with the women's start slightly below the men's.

In Valtournenche, Italy, the Matterhorn is often referred to in the local dialect as "Gran Becca" – the big peak. The shape of the "Gran Becca" will be visible along the full race course and will accompany the athletes all the way to the finish in Laghi Cime Bianche: "There are lots of other important peaks with the name Becca in the Aosta Valley," says OC Vice Chair and Chair of the Valle d'Aosta Regional Ski Association, Marco Mosso, "but there is only one Gran Becca." The name of the new race course is a reminder of the affection the residents of Valtournenche have developed for the Matterhorn over decades.

The organising committee of the World Cup races on the Matterhorn can count on high-profile support. 1988 Olympic downhill champion, four-time World Champion and four-time overall World Cup winner Pirmin Zurbriggen is also the face of the "Gran Becca" downhill. The 58-year-old Valais native is patron of the new World Cup course and ambassador of the speed opening event. "I appreciate being able to contribute my knowledge and experience to such a visionary and innovative project. The World Cup races in Zermatt and Cervinia are a dream come true," says Zurbriggen.

The infrastructure required for the Ski World Cup races is already largely in place, making the event a commendable example of sustainability. Tourists and locals currently ski on 95 per cent of the piste area so adjustments will be minimal. With two-thirds of the course on a glacier, it can benefit from a lot of natural snow. The glacier is not irrigated. If artificial snow is still needed on the lower third, it is produced from 100 per cent meltwater by an existing system that has been replaced by a more efficient and environmentally friendly one. Large spill zones have the advantage that no fixed poles are required. With no requirement for forest clearing or new cable cars, existing accommodation and catering capacities in the destinations are also sufficient to accommodate the ski teams, sponsors, media representatives and spectators. All this means that no installations will be left after the races, other than those already in use.

The height of the course creates a certain degree of risk in terms of weather. However, the statistics of recent years very often show longer, stable high-pressure conditions with relatively warm temperatures in November.

"Gran Becca" on the World Cup calendar from 2023 onwards

Bad weather in May, June and July this year meant a three-month delay in the construction of the new 3S Testa Grigia – Klein Matterhorn cable car. Connecting Cervinia and Zermatt all year round and enabling the Matterhorn/Cervino World Cup Races, this cable car will now open in spring 2023 instead of autumn 2022, which means the first World Cup races can only take place in autumn 2023.

The course will still see some action in the 2022/23 season nonetheless: a shortened "Gran Becca" will be available to all teams for training for three weeks from 24 October 2022. "In addition, we have proposed to the FIS to hold two men's European Cup downhill races at the beginning of November", Franz Julen continues. The big opening is then planned for autumn 2023: the programme includes two World Cup weekends with downhill and super-G races for women and men. The races take place at the end of October and beginning of November – immediately after the World Cup opener in Sölden.

From 1 December 2021, Christian Ziörjen will take over operational responsibility for the Matterhorn Cervino World Cup Races as CEO of the Local Organising Committee. The 36-year-old has been employed as Head of Destination Services & Events/Partnership at Zermatt Tourism since 2016. Ziörjen is very familiar with the local conditions on both sides of the Matterhorn; various joint projects and events have already been implemented together with Cervinia. "With Christian Ziörjen and other exponents, as well as the cooperation and support of Swiss-Ski and FISI, the local organising committee is now ideally equipped to stage a top event," says Franz Julen.

The media kit with pictures and video footage from the course is available at bit.ly/3FMQZTb