On 08 August 2021, the traditional Valais annual cow fighting festival will take place in Zermatt for the second time. Around 100 Eringer cows will fight for the title of ‘Reine du Cervin’. 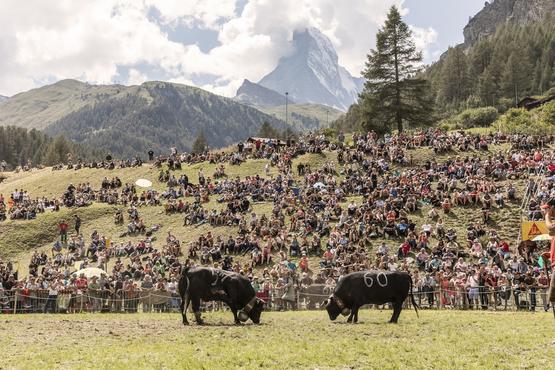 Two strong black cows stand opposite each other, the majestic Matterhorn in the background. This scene last occurred in 2018 and will return on 08 August 2021. The Upper Valais summer Ring Cow Fight, known as the ‘Sommerstechfest’, is coming to Zermatt for the second time. Around 100 Eringer cows will fight for their place in the herd’s hierarchy, as they do naturally, to earn the title of ‘Reine du Cervin’. This will take place in the Matterhorn Arena on the far side of Zermatt with the majestic Matterhorn in the background.

The traditional Valais event took place in the Matterhorn village for the first time in August 2018, and was a resounding success. A total of 4,500 spectators came to the festival from Switzerland and around the world. Provided the weather plays along, the organisers are hoping to see similar visitor numbers this time. The event will take place in July rather than in August as is traditional, so that it fits better into the Eringer Breeding Association’s events calendar in the Nikolai valley and Zermatt – Matterhorn.

Cow fighting goes back years in the Valais region. As the name suggests, the fights are between Herens cows and, in contrast to bull fights, normally end without any injuries. The fights are the breed’s natural way of selecting the herd’s leader. The tournament is run by the livestock breeding association EVZG Nikolaital; the preliminary rounds start from 09:30, with the final fights taking place at around 15:00 hrs. The entrance fee is CHF 20 for adults and CHF 10 for children between the ages of 10 and 15. The proceeds from the ‘Reine du Cervin’ are used to maintain the infrastructure of Zermatt Alpine associations.