The Omnia has received its 16th Gault Millau point

Another point and Chef of the Month – that’s the good news from The Omnia. Chef Hauke Pohl creates inspiring, sophisticated cuisine that focuses on vegetables. 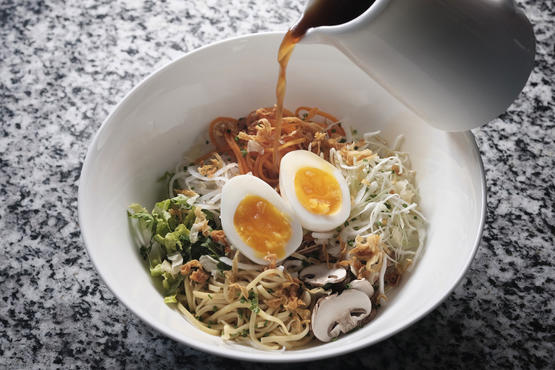 It’s a rare occurrence, but when Chief Tester Urs Heller himself pays a visit, this happens: The Omnia won an additional Gault Millau point midway through the year, even though the new guide won’t appear for another six months. On his visit, Urs Heller was so impressed that he immediately upgraded the restaurant in the five-star hotel from 15 to 16 points. He also named chef Hauke Pohl as Chef of the Month.

For the last few months, The Omnia has been focusing on a new gastronomy concept, centred around vegetables. Dishes include “Valais Ramen” with mushrooms, vegetables, spelt noodles and an egg. Vegetarian cuisine doesn’t have to be 100% vegetarian, though – there’s always a meat option. In addition to exquisite cuisine, Hauke Pohl also serves comfort food including tagliolini with egg yolk, Sbrinz (hard cheese) and bacon or Wiener schnitzel.