The Stafelalp mountain restaurant above Zermatt, with views of the north face of the Matterhorn, will re-open on 22 December 2018. Following the fire in April this year, owner Sarah Schwarzenbach and her team are looking forward to a new beginning. 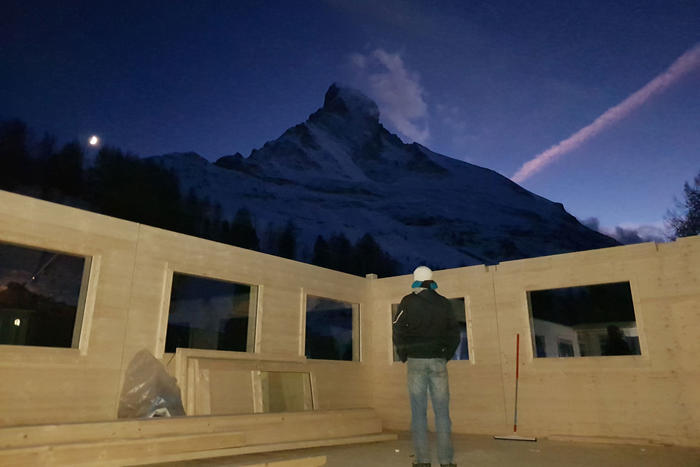 Chef Hubert Koenig is enjoying the views, even if there isn't a roof yet. - © Stafelalp

Located at 2,200 m at the foot of the Matterhorn, the Stafelalp can be reached from Zermatt along the Matterhorn Trail or via the Schwarzsee cable car station. The Stafelalp mountain restaurant was destroyed by a fire on 13 April 2018.

A temporary construction was started on 5 October 2018 and will open on 22 December 2018. This will operate for at least three years, until the Stafelalp mountain restaurant has been re-built on the original site and is up and running.

"We are really excited about this new beginning and are positive about the future," said owner Sarah Schwarzenbach. The restaurant is right next to the piste and in the centre of Zermatt’s network of hiking and mountain biking trails, offering direct access onto the ski slopes in winter.

The Stafelalp restaurant, along with the Matthiol Boutique Hotel and the Matthiol Serviced Apartments, is part of Maisons Matthiol. This group was formed by Schwarzenbach in 2017 and consolidates the three companies.

The temporary Stafelalp build is made completely of wood and focuses on natural elements. There is space for 150 people on the outdoor terrace and inside seating for ninety. The temporary build is open all year round between 10:00 hrs and 18:00 hrs and is managed by 26-year old Sabrina Visinoni. She is dedicated to providing the very best service and has a team of 15 employees helping her.

Swiss cuisine with a modern touch

Hubert Koenig has been the chef at the Stafelalp mountain restaurant since 2013 and will continue in his role from 22 December 2018. Originally from France, he specialises in Swiss cuisine with a modern touch. The menu will offer a wide range of dishes including cold platters, dry aged beef, several vegetarian options and traditional cheese fondue.