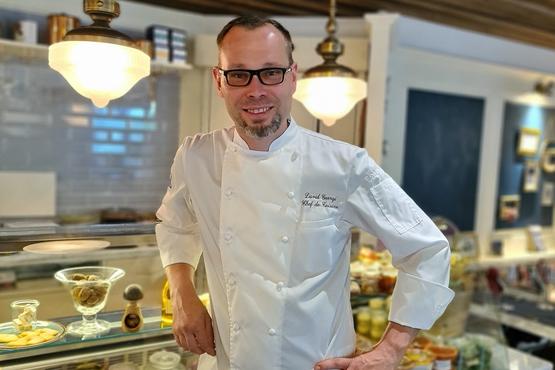 Le Mirabeau Hotel & Spa, now run by the third generation – Francis and Marie Reichenbach-Julen – has recruited the young, dynamic chef de cuisine David Georgi, whose traditional Alpine cuisine is shaped by his years of experience in Zermatt. He takes over from Alain Kuster, who previously held the position for almost 30 years.

David Georgi earned his spurs in both mountain restaurants (Restaurant Adler, Zermatt) and hotel restaurants (Parkhotel Beau Site, Zermatt) and is looking forward to creating exquisite dishes for both hotel and à la carte guests in the Mirabeau: “The two very different concepts – Restaurant Veranda and the Deli, offering catering and event services – present plenty of opportunity for me to develop my style. They have a fantastic mix of repeat guests and a new, younger clientèle, so I’m really looking forward to the challenge!” says the 40-year old German.

The Mirabeau has a long tradition of outstanding cuisine, with Sepp and Rose Julen opening Zermatt’s first gourmet restaurant – the Corbeau d’Or – back in 1987. Years later, in 2019, the Restaurant Veranda was awarded 14 Gault Millau points.

The Corbeau d’Or became Marie’s Deli in 2017, offering all-day cuisine including homemade deli and other food items, as well as catering and event services, where they benefit from having their own food truck.

The young hotel directors are feeling very positive: “The new deli concept allows us to take the first step towards adapting to rapidly changing guest requirements. David Georgi is just the right young head chef to bring on board to help us realise our vision of elegant, homemade cuisine in a relaxed atmosphere, offering guests the flexibility they’re looking for,” says Francis Reichenbach.