Roman Codina will take over as the new director of the Parkhotel Beau Site in Zermatt. He replaces Franz Schwegler-Dossetto, who is retiring. 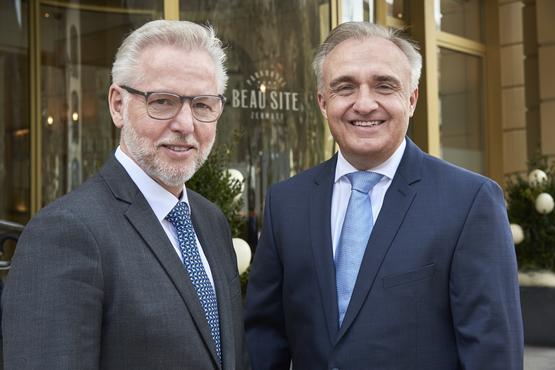 Schwegler has really enjoyed his time as director, with many unforgettable experiences with wonderful, loyal employees and guests from the around the world: "Welcoming guests, spoiling them and seeing them return year after year has been simply amazing and so fulfilling!" Franz Schwegler managed the Parkhotel Beau Site for 24 years. Under his leadership, a series of building renovations, refurbishments and alterations were carried out, maintaining the Parkhotel Beau Site’s high quality and contemporary appeal. Achieving a balance of tradition and modernity has always been the top priority and the close, constructive relationship with the owners, the Aufdenblatten and Julen families, has been instrumental in successfully achieving this.

At the end of April, Franz Schwegler-Dossetto will hand over the Parkhotel management reins to Roman Codina. Codina, born in Schaffenhausen, brings extensive hotel management knowledge and experience with him. He studied at the Hotel Management School in Lucerne and has completed the General Manager program at Cornell University and training in e-commerce and online marketing. He was Vice Director of the Mont Cervin Palace in Zermatt for four years. He then moved to The Omnia in Zermatt, where he was their General Manager for two years after the hotel first opened. During his time there, he carried out a successful relaunch and re-marketing strategy for the former "Into" hotel. After six years in Zermatt, he moved to Bern to be Assistant Director of the Hotel Bellevue Palace from 2010 to 2013. He then managed the Grandhotel Giessbach in Brienz for four years, helping to breathe creativity and imagination into the traditional establishment. "I am thrilled to be returning to Zermatt and to have the opportunity to shape the future of the renowned Parkhotel Beau Site," says Codina.

About the Parkhotel Beau Site

Built in 1907 during the golden age of alpinism and the Belle Epoque, and maintaining its style and quality over the years, the Parkhotel Beau Site in Zermatt combines luxurious tradition with the best modern features. For 112 years it has been the people who have made the Beau Site what it is today – a haven of generous, welcoming hospitality.