Total high - Euphoria on the Matterhorn.

It is well known that athletes use the euphoria effect to their advantage. There is less oxygen, so the body produces more red blood cells. This is natural doping - and can go on for up to three months afterward. The moderate altitude of 2,000 to 2,500 m is the range in which endurance athletes complete their elevation training, where most Alpine Association huts are located and where the holidaymaker can enjoy hiking. 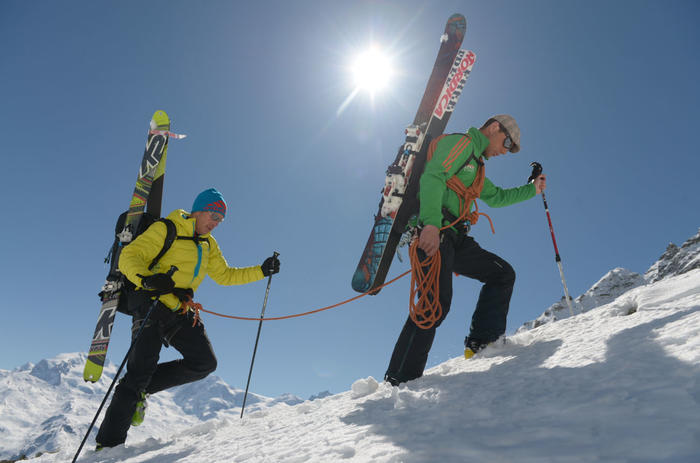 An interview with high altitude physician Prof. Dr. Wolfgang Domej, Vice-President of the ÖGAHM (Austrian Society for Alpine and High-Altitude Medicine) and President of the ARGE Alpine Medicine.

What happens to the human body, if for example you go up in a cable car to reach a higher altitude – apart from the feeling of pressure in the ear and sometimes fatigue, you don’t notice much.

A healthy person begins to breathe imperceptibly faster due to the oxygen deficiency as the altitude increases, the pulse is somewhat faster, and the blood pressure goes up slightly.

That means that being at a certain elevation causes a “natural doping” effect, which top athletes know how to use to their advantage.How does oxygen-deficient air cause a doping effect?

The “doping effect” refers primarily to an improved oxygen supply to the body at a normal altitude following a period at a higher altitude.

To what do you attribute the boom in alpine sports over the last years?

Alpine sport still has the flavour of adventure, the impressions of a natural, marvellous landscape and the contrast to the gloomy big city offices that only rarely allow any physical self-realisation.

If you wish to be able-bodied at 4,000 m, you should acclimatise yourself for a few days to get used to the altitude. A short stay at this altitude is advisable.

There are mountain people in Tibet who from birth live continuously at moderate and higher altitudes. How do you distinguish between – e.g. Venetians, who live at sea level, or is there no physiologically measurable difference?

There is, as we now know, genetic adaptation differences, which have developed over millennia; the Tibetans are a people who have proven they can live for a long time at high altitudes and therefore are genetically best adapted to the oxygen deficiency at those elevations.
Off the top of your head, can you tell us the benefits and risks of a stay of several days at an altitude above 3,000 m. A stay at 3000m is no real great challenge for a healthy person; but one should definitely be aware of the climatic factors (cosmic radiation, cold, air dryness, oxygen deficiency). Short holidays at altitudes of around 2,500 – 3,000 m are even a healthy endeavour and strengthen the immune system by increasing red blood cells.

Do you think it's possible that these effects at moderate and high altitudes can be used for meditative and spiritual effects? Does this already exist in Europe?

There are monasteries in Nepal at 5,000 m. I believe that meditative thoughts can arise as a result of an imposing mountain landscape only if one sees the mountains as more than pure “sporting equipment”, as is frequently the case nowadays.

Do you know any myths about “Men and Mountains”? If so, which ones?

It is well known that at extreme heights the oxygen deficiency can cause hallucinatory states that are good for creativity; but they also represent a considerable threat if one does not deal with them adequately.

How do a moderate and high altitude influence mental state / ability to concentrate / multitasking / emotionality - has any research been done in this regard?

Even at moderate altitudes, a person’s reaction time and attention begin to measurably decrease as a result
of oxygen deficiency.

This interview was conducted by Dr. Monika Wogrolly- Domej. With the kind permission of the culture magazine LIVING CULTURE