What you have always wanted to know about our electric buses

The Zermatt electric bus has a characteristic shape, is powered without a combustion engine, does not produce any emissions, is locally produced as a unique item and has become synonymous with mobility in the village. The Matterhorn spa resort has always been “car-free” even if there is still traffic. Yet pedestrians rule in the narrow streets of Zermatt, under Section 3 of local traffic regulations. 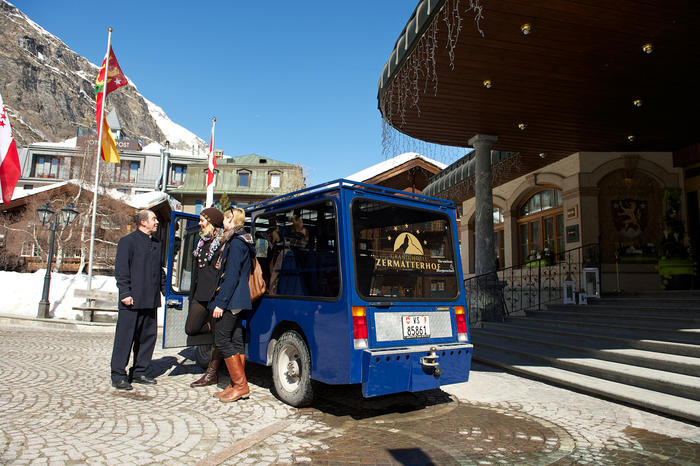 Hotelier Dr. Alexander Seiler II was the first to drive a four-wheel motorised vehicle to Zermatt – or into the canton of Valais, probably in 1910. However, the car has not caught on in the high alpine world at the foot of the Matterhorn. It was the electric bus that prevailed. The first of its kind is said to have been seen in 1947. It had a passenger section with a tow bar, which is very rare with this kind of model today. The big turning point came in the 1970s. Up until then, the “Mattini” and their guests got around on foot or by horse-drawn carriage. At last count, there were 40 one-horse carriages and four two-horse carriages. Today, there are only two of each, run by Werner Imboden, Zermatterhof and Mont Cervin Palace. The old Zermatt road network remains, to which there are natural limits, due to its location between steep mountain cliffs. Nevertheless, the village is growing. Up to 30,000 people come to stay in Zermatt for six to eight weeks every year, not including day trippers. There is increasing demand. New hotels and business are springing up, creating the need for an electric bus to transport guests and goods.

Around 500 electric buses are registered in Zermatt. Most of them were built by Stefan and Bruno Imboden in their workshop on Bodmenstrasse – a completely different world near the station, where Belona, one of Zermatt’s three horses, is cared for and where electric buses are repaired within days and also made to order for customers, which requires months of work. The Imboden brothers weld together the bodies in their workship in Niedergestein in the Rhone Valley.
The body shape and mass of 1.40 by 4 metres is stipulated by the local authorities and helps to make the means of transport the village’s trademark. The challenge for the bus builders comes when trams, roll-on roll-off containers, heating oil and other vehicles with a payload of up to 3600 kilograms have to be accommodated in just a few cubic metres. This is carried out by polymechanics, electricians and metalworkers. Electric bus builder is not a profession with formal apprenticeships.

The early buses, built in 1977, are still in operation, as they have sophisticated technology and their bodies are made from aluminium. This prevents corrosion and is light-weight. At 2000 kilograms, electric buses cope well with the snowy roads during the winter. Their life span is 30 to 40 years. However, the Zermatt bus is not exactly cheap: it can cost between CHF 65,000 and CHF 90,000 and even up to CHF 120,000, when built to special requirements.
The heart of the vehicle is its battery. It is charged with electricity from the domestic supply network. Depending on the age of the battery, the weight of the load, driving behaviour, season and the gradient of the terrain, it needs to be charged either every day or every other day. Each charge costs between three and five CHF in electricity costs. Plus the purchase costs, which range from CHF 6000 to CHF 7000. The life span of the battery varies from four to twelve years.
Bruno Imboden cannot imagine the product ever becoming a hit export: “We want to remain a small business.”

Caption:
Registering an electric bus is subject to a strict licensing procedure. Private trips are not permitted.

When their blue lights and sirens are on, the local police are permitted to drive faster, exercising due caution.

The first car with a combustion engine came to Zermatt in 1910. A model that did not catch on.

Until the invention of the car, walking was not just a question of lifestyle, it was a necessity.

Werner Imboden presents the heart of the electric bus: the battery has 48 to 80 volts of power.