The Mountain Boot Handcraft Rests in the Museum

Custom-made mountain boots were made-to-measure in Burgener Shoemaker’s Shop for over three generations. Their hand tools and utensils are on display in the Matterhorn Museum. Zermatt’s Otto Burgener gave them to the museum as a loan. To mark its 10th anniversary, the museum is paying homage to him, the last great master of the Zermatt shoemaker’s guild. 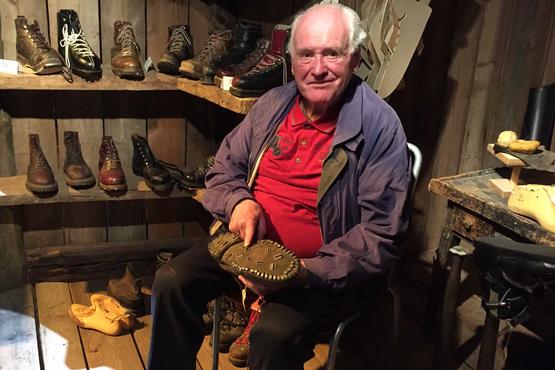 Otto Burgener is sitting in the shoemaker’s hut in the museum. His eyes glitter with zeal when he talks about his craft. "For 75 years, I have made mountain boots," he says and points to the shoe models, which are on display in the shoemaker’s hut. He picks up a mountain boot from 1954 with his hand and turns it around to explain the different types of cleats in the soles: "The Tricuni used to be the best cleats for ice," he says professionally. For example, the legendary mountain guide Ulrich Inderbinen (1900-2004) also knew that. During his long life, he only went into the mountains with Burgener mountain boots. "Then there are also the Hammernägel, Mäuseköpfe and Mugger," says Burgener. If you look very carefully at the handmade mountain boots in the museum, you will also see small, bright points. "Those are the wooden cleats, called Tubla, which hold the layers of the shoe sole together," explains the master shoemaker.

Mountain boots with metal cleats got competition in 1939 – Otto Burgener knows that exactly – from the Vibram sole. "We had to always adjust to the latest trends," he says looking back. The mountain guides of Zermatt were very skeptical about the rubber soles. Safety always comes first, and slipping in the mountains can mean death. That is what they have known in Zermatt since the first ascent of the Matterhorn. Furthermore, the materials respond differently on different surfaces: "If mountain guides from Chamonix wanted mountain boots, their soles were fitted with other cleats. Because Chamonix has other rocks than those in Zermatt," explains Burgener.

What began in the 19th century as a modest shoe workshop became an institution in Zermatt over three generations. Alois Burgener made the first mountain boots in his workshop in Zermatt in 1879. This was a few years after the first ascent of the Matterhorn in 1865. Guests were trooping to the Matterhorn village from all over the world to climb the mountains. Contrary to the fallen companions of the Englishman Edward Whymper, the following Matterhorn conquerors did not want to climb on the four thousand-metre peaks wearing normal street shoes without cleats. In the museum, one shoe each of Lord Francis Douglas and Reverend Hudson is on display. They fell to their deaths during the descent after the triumph on the summit of the Matterhorn. The reason for this accident that led to four deaths: the least experienced slipped.

The Burgener dynasty made the first pair of ski boots in 1940. Later came lambskin-lined après ski boots. In addition to the customers for mountain climbing and ski boots, their clientele included the Zermatt mountain guides along with many celebrities from Switzerland as well as from the United States, China, Russia or England. "Many customers could not be kept away and travelled to Zermatt to try on or pick up their boots themselves even if they were coming from the United States or England." A pair of made-to-measure mountain boots cost 45 Swiss francs in the 1950s. They took four days of work to make.

Otto Burgener ran the shoemaker’s workshop in its third generation for decades. In 1879, his ancestor Alois Burgener (1858-1939) came to Zermatt from St. Niklaus, 15 km away, and began to make shoes and mountain boots. He was so good at his craft that by the end of the 19th century, almost all Valais mountain guides and major Alpinists wore Burgener mountain boots. Where he learned his craft is unknown. His sons followed in his professional footsteps and his knowledge and abilities were passed on.

Today, the Burgener shoe store has become a shoe and sports shop. Only one plaque on the building reminds the past. The shoemaker’s workshop has been closed since 1998. But demand remained, and so Otto Burgener continued to make made-to-measure mountain boots on order in his workshop until 2012. This still meant four days of work.

The shoemaker’s workshop in the Matterhorn Museum Zermatlantis is now on loan to the museum from Otto Burgener. Here stands the workbench that his grandfather Alois had used. Here it is possible to hold his shoe models in your hand. Here lie cleats, Tricuni, Tubla and a shoemaker’s hammer. They bear witness to a handcraft from the past.

Seiler Collection as the Museum’s Cornerstone

The Matterhorn Museum Zermatlantis goes back to the private collection of the Seiler Hoteliers Family. The members of the Seiler Family collected their first pieces in the 19th century. Among things were remnants from the first ascent of the Matterhorn. The first museum was founded in 1904. In 1958 followed the opening of the Alpine Museum in the Seiler garden. Over decades, it developed into the most visited local museum in Valais. But over time, this museum was no longer able to meet the needs of its visitors. Many people from Zermatt made a dedicated effort for a new museum, including Ivo Biner and Willy Hofstetter. Finally, the new museum was inaugurated on 18 December 2006. Today, the Matterhorn Museum Zermatlantis is still the local museum in Canton Valais which has the most visitors each year with over 40,000 guests.