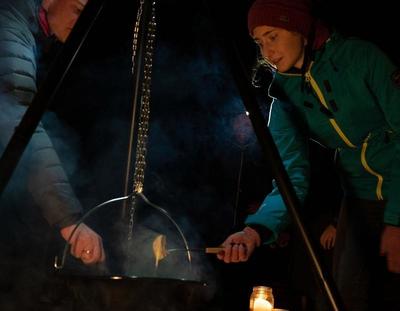 Fondue under the stars 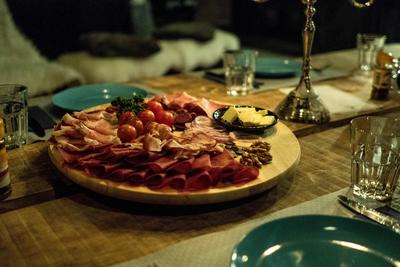 Climbing the Riffelhorn – the dream of all recreational climbers

The Riffelhorn is quite simply a climber’s paradise – good rock, fantastic views and easily accessible. 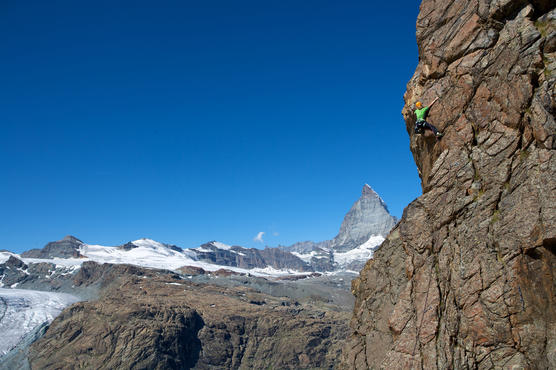 The Riffelhorn (2928 m) is widely regarded as a preparatory or training climb for bigger exploits such as the Matterhorn. But even on its own terms it’s one of the best climbing mountains for far and wide, offering everything one could wish for: a mere 15-minute walk from Rotenboden station on the Gornergrat Bahn, a view of over 20 four-thousanders, the Gorner Glacier and the Breithorn, good rock and varied routes. In short: a climber’s dream.

The two local mountain guides, Richard Lehner and Reinhard Zeiter, have set up a new climbing route in 2012. It’s called the “Bartgeier” (“Lammergeier”) and has a variant named the “Querdenker” (“Lateral Thinker”). It’s a four-pitch climb graded UIAA (Central European) 4+ throughout. The rock is gneiss, offering good grip and making for pleasantly varied climbing on the South East Ridge of the Riffelhorn. The climb is exposed in parts, with a fantastic view of the Monte Rosa Massif and Gorner Glacier.

The base is easy to reach from Rotenboden station. Simply follow the tracks leading to the South Face routes. Thirty metres after crossing through the distinctive couloir across the South East Ridge, a bolt and hanger mark the start of the climb. In the third pitch, one has to traverse to the left after about 5 metres. The way out of the route is via a transverse gully (UIAA 2) that heads north off the Riffelhorn.

Necessary equipment: because sections of the route require self-securing by the climber, a 45-metre rope, nuts and friends are needed.

Those who choose the “Querdenker” will need to cross the “Bartgeier” from the right and proceed to the foot of the climb. This route (UIAA 5+) is more exposed (to the east) than the “Bartgeier”. Be warned, the wind will whistle around your ears! “Berg Heil” as the local climbers say!

The patron bird of the new route

“Bartgeier”, incidentally, is not simply a name plucked out of thin air. From time to time these large and majestic birds can be seen circling above the Riffelhorn. “During the route preparation work, a lammergeier (also known as the bearded vulture) flew past just a few metres from the rock”, explains Richard Lehner. The lammergeier has therefore been adopted as the patron bird of the new route. Lammergeiers have a wingspan of up to 2.6 m and are the largest birds of the Alps. In flight they are easy to distinguish from eagles as their wings droop down slightly, unlike those of the golden eagle, which form a V shape with the tips pointing slightly upwards.