The black nose sheep Wolli is the friend of all children. Wolli accompanies the young ones on holidays, such as Christmas and Easter, and visits with them every Monday afternoon along the Bahnhofstrasse in Zermatt. 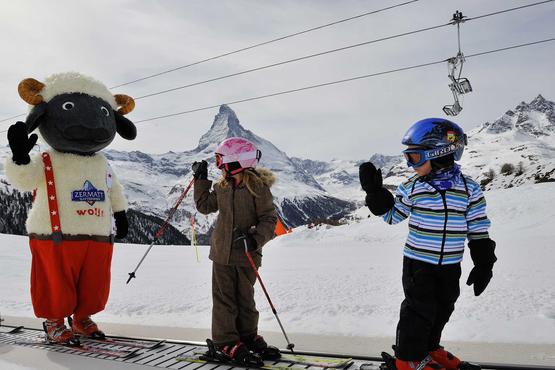 The Zermatt-Matterhorn destination has a mascot. It is called Wolli and is a young, adventurous black nose sheep. Black nose sheep are mountain sheep, which were originally at home in Valais. They have a cuddly, white coat and a black face, which is why they are called black nose sheep. But they also have black spots on their knees, elbows and tail. And they are strong, tough in winter, and agile in the mountains. Just like Wolli.

The idea and figure are rooted in Zermatt’s shepherd culture. Dan Daniell – entertainer, singer, cook and restaurant owner, wrote the children’s book “Wolli on the Matterhorn.” The illustrations were drawn by Martina Friedli. The caricature is seen everywhere where destination operations offer families high-quality products and services for children. Wolli helps with directions. Wolli contributes to making Zermatt an unforgettable experience for children.