The Matterhorn was long considered too difficult to climb. On 14 July 1865, the British climber Edward Whymper reached the top together with three mountain guides and three English. Only three people survived the descent. 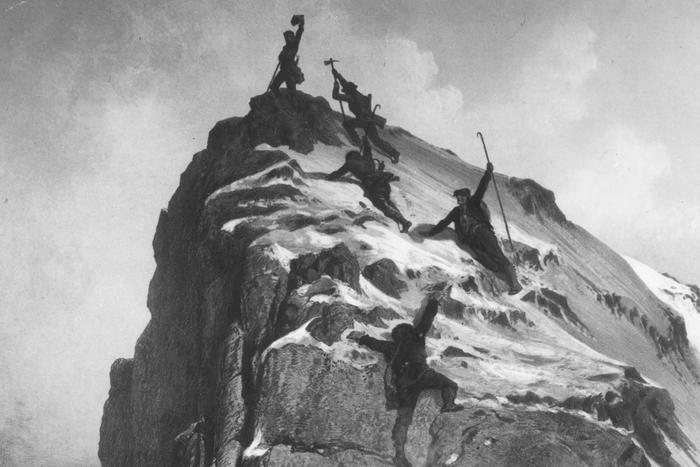 The Matterhorn has always attracted Alpinists. TV documentaries show climbs on the Hörnligrat and the story of the first ascent on 14 July 1865.

Many Alpinists had tried to reach the top of the Matterhorn – none of them succeeded either from the Italian side or from the Zermatt side. On 14 July 1865, a seven-member rope party with Edward Whymper succeeded in the first ascent. The group climbed via the shoulder on the Hörnligrat and further up, in the area of the present fixed ropes, switched to the north wall. Edward Whymper was the first to reach the top. He was followed by the mountain guide Michel Croz (from Chamonix), the Reverend Charles Hudson, Lord Francis Douglas, Douglas Robert Hadow (all from England) as well as the Zermatt mountain guides Peter Taugwalder (father) and Peter Taugwalder (son). During the descent of the first climbers, the front four-member rope team (Croz, Hadow, Hudson and Douglas) fell to their deaths over the north wall while still above the shoulder. Three of the bodies were recovered a few days later on the Matterhorn glacier. The corpse of Lord Francis Douglas has not been found yet.

The Deaths Provokes the Tourist Development of Zermatt

Because of the death of Lord Francis Douglas, the then British Queen Victoria wanted to issue a ban. She said that she would never again permit English royal blood to be wasted on the Matterhorn. Her suggestion triggered curiosity and a thirst for action among British Alpinists. British travellers and Alpinists from then on came to Zermatt in masses to see and also climb the Matterhorn. The tourist development of Zermatt had its beginnings here. For generations, guests from the British Isles have remained faithful to Zermatt.