History of the Zermatt municipality

Zermatt’s history stretches back to the 13th century. Since then, the village has been temporarily ruled by the Bishop of Sion, divided into three municipalities and annexed with France. 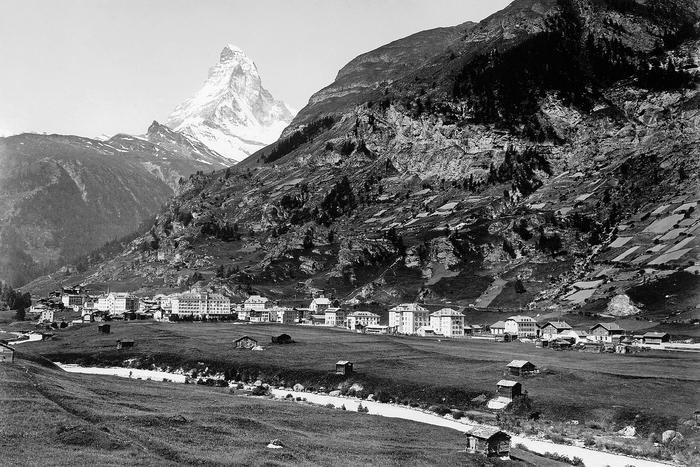 The village at the foot of the Matterhorn was first mentioned in documents in 1280 under the name “Pratobornum”. The municipal seal still bears the name “VALLIS PRATO BORNI”. The current name of “Zermatt” is a German translation of the Latin “Prato Borni”. The German name was first mentioned in documents in 1495 and 1544. At that time, it was written as “zer mat”, “zer Mat” or “zur Matt”. Many different versions of “Zer Matt” appear until the 19th century, when its current spelling of “Zermatt” was agreed upon.

Bishop of Sion
In the 13th century, Zermatt and all its residents, goods and land were under the authority of the Bishop of Sion. History reports that the clergy transferred their rights to various secular landowners. However, Zermatt residents had always had their own rights of use and administrative freedoms, which they were allowed to retain under their new rulers. These rulers decided it was expedient to divide the whole population, including all their goods, forests and land into four quarters: “Hoffero”, “Winchilmattero”, “Muttero” und “Aroleitero”. This division led to dissatisfaction amongst the population; the quarters of “Hoffero”, “Winchilmattero” and “Muttero” subsequently re-combined their goods.

Buying freedom
Disputes between the quarters, particularly with “Aroleitero”, continued until 8 March 1555, when the legal status of the combined quarters was laid down in a judgement by the local steward. Over the course of the next few years, more and more and Zermatters managed to buy their freedom from rule and tithing rights. The first such purchase took place on 1 December 1538 and brought freedom to more than half the population. The heads of these 115 families joined forces on 25 January 1540 in the church in Zermatt, creating the first municipality run by a local steward.

Between France and the Old Swiss Confederac
Zermatt as a community of citizenship had been introduced to the world. The constitution of 21 January 1621 and the farmers’ guild regulations of 4 March 1579 still applied. Seven years later, the French under Napoleon I invaded the Valais and its legal status came to a bloody end. The whole area in what is now the canton of Valais was annexed to France. It was not until the fall of Bonaparte in 1814 that the Valais regained its freedom as a republic and was able to join the Old Swiss Confederacy in 1815.

The first Citizens’ Regulations
In the 1860s, how citizens’ goods were used was also a matter for dispute between locals. To resolve this definitively, the government of the canton of Valais sent the region’s chief official from Visp to Zermatt. Under his supervision, on 12 May 1867 in the municipal offices, both parties agreed the first Citizens’ Regulations in writing. These were renewed on 10 May 1914.

Creation of the Zermatt municipality
Municipalities were thought to have been established and expanded by the French Revolution. The Zermatt Municipal Community issued its first official document on 2 June 1851. This legal form therefore came into force only three years after the Swiss Federal Constitution was established. As the village grew, the tasks of both municipalities also increased, both in size and extent. While the Citizens’ Community developed into an administrative body for citizens’ assets, the Municipal Community became a political body and is now known as the Residents’ Community.  For years, both Communities were managed under the same umbrella. However, the concerns of the Citizens’ Community changed as the village grew. As a result, it separated from the municipality and established its own administrative structure.

Coat of Arms
Zermatt's coat of arms features three hills, with a golden lion standing on two of them, flanked by two five-pointed stars. The background is red. The symbolic power of the lion has often appeared on many coats of arms. The Zermatt lion is thought to have been “borrowed” from the coat of arms of Vespia Nobilis (the capital of the district of Visp) to reflect their association.