English Church in Zermatt - since 1870

The Anglican Church of St. Peter celebrated its 140th anniversary on the 26th June 2010. For Zermatt, it is more than just a church: it is part of the history of Zermatt and the tradition of alpinism, hospitality and openness to the world. 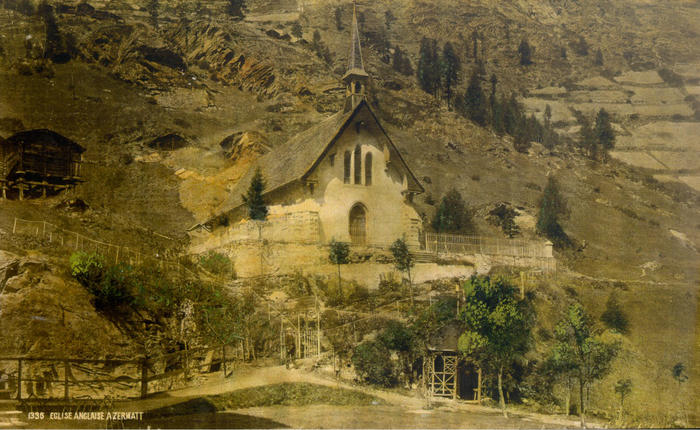 It was truly a product of its time: In the “Golden Age of Alpinism” and the pioneering age of Zermatt tourism, the overwhelming majority of the visitors were from England, and it’s therefore no surprise that, in the Victorian era in which religion and religiousness were of great importance, English visitors began to express the wish for an Anglican church. This desire was very well understood by the inhabitants of Zermatt, for whom religion and the church form an important part of the community.

Protestant Sunday services for English-speaking guests had thereby already been held in the Hotel Monte Rosa and in the Hotel Mont Cervin since 1862. The first plans for the building of an English church were drawn up in May 1865, and a donation list was prepared at the same time. The two hoteliers Alexander Seiler and Joseph Clemenz were the first to add their names to this list, because, although they were both Catholic, this corresponded with their ecumenical and cosmopolitan beliefs. The tragic end to the first ascent of the Matterhorn did nothing to impede the initiative to set up their own church, but actually strengthened it even more: The Marquis of Queensberry, head of the family of Lord Douglas, and the relatives of Douglas Hadow immediately made large donations. The foundation stone for the English Church was laid on the 29th June 1869, only five years after the start of the donation list. The first mass took place one year later, on the 29th June 1870, and the church was consecrated by Bishop Edward Parry from Dover on the 6th August 1871. This great celebration was attended by both guests and local people.

The building costs amounted to 1,575 pounds sterling. Although this amount may seem rather low by today’s standards, it represented a considerable sum at the time, and also had to be raised through voluntary donations alone. The church has been renovated several times in the meantime. In 1925, for example, the Alpine Club of Great Britain financed the renewal of the roof in memory of its deceased members. A further renovation of the church took place between 1997 and 2000.
There are numerous plaques inside this historic church in memory of mountaineers who had particularly close links with Zermatt and its mountains. The remains of the Reverend Charles Hudson, who fell to his death during the first ascent of the Matterhorn, are buried under the high altar. The church also possesses his Bible and the prayer book that he used as a military chaplain during the Crimean War.

The pastoral services for Protestant guests in Zermatt are provided by the Intercontinental Church Society. The clerics, who originate from England, are changed every two weeks and still have important duties today. They not only hold services and officiate at baptisms and weddings, but also provide consolation and help whenever they are needed.