The GGB Gornergrat Bahn started operations on the 20th August 1898 – the first electric rack railway in Switzerland and the second in the world. A tourist attraction of the Extra class was created thanks to innovative pioneering spirit: The Gornergrat Bahn was the first railway in Europe to run at an altitude of more than 3,000 metres above sea level. 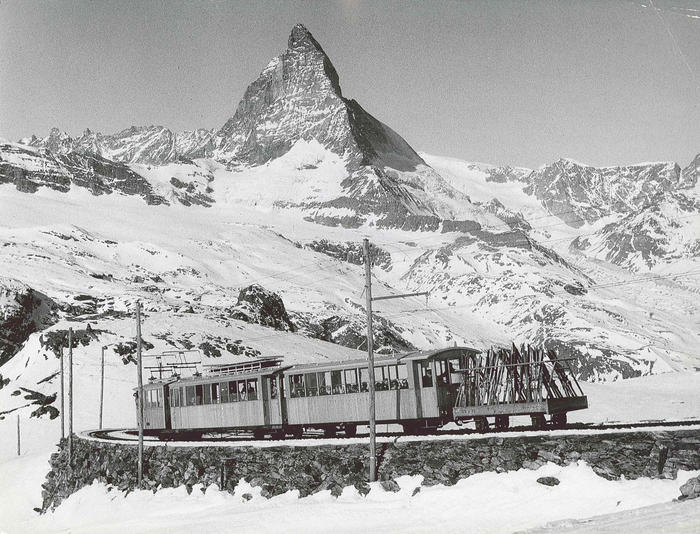 The GGB Gornergrat Bahn started operations on the 20th August 1898 – the first electric rack railway in Switzerland and the second in the world. A tourist attraction of the Extra class was created thanks to innovative pioneering spirit: The Gornergrat Bahn was the first railway in Europe to run at an altitude of more than 3,000 metres above sea level. The mysterious world of the mountains was made accessible to everyman by the Gornergrat Bahn – and even in winter from 1928 onwards. In this way, an important foundation was laid for winter tourism, which was rapidly gaining in importance.

The perilous, wild and mysterious world of the Alps has attracted more and more people since the 18th century. Guest from all around the world have wanted to be close to the majestic snow-covered mountains, to discover the wonder of nature and to conquer the summits. One summit in particular was especially fascinating for the early adventurers: the 4,478 metre high Matterhorn. The first ascent was a sensation at the time. The interest of the first alpinists for the Gornergrat was similarly high – after all, you can see 29 four-thousand-metre mountains from this point. The Gornergrat Panorama first appeared in the "Baedeker" travel guide in 1856, and the Gornergrat has been marked on the Swiss Dufour map since 1862, with actual tourism on the Gornergrat developing from around 1870. As early as 1890, even. before the completion of the railway to Zermatt, around 8,000 guests had already visited the Gornergrat.

There was great opposition to the construction of the Gornergrat Bahn at the beginning, above all due to the competition that the railway threatened to provide to the guides and porters. In its letter of 29.10.1895, the Federal Council countered the fears of the local people by pointing out that the same fears had been proved to be groundless in the Bernese Oberland. The construction of the gigantic excursion railway, the GGB Gornergrat Bahn, started in 1896. As the Gornergrat is at an altitude of 3089 metres, the available construction period between the melting of the snow and the onset of the following winter was extremely short. More than 1,000 workmen were used at the same time – most of them Italians. In total, around 2,400 workers were employed during the two-year construction phase.

The Federal Council proved to be right

The Federal Council was proved to be right: The news of alpine conquests and the opening up of the route from Visp to Zermatt in the year 1891 by the Visp-Zermatt-Bahn had made Zermatt world famous even then. The new attraction, the first electric rack railway in Switzerland and the second in the world, greatly increased the attraction of the young alpine tourist resort of Zermatt from 1898 onwards. Thanks to the start of winter operations by the then BVZ company and the Gornergrat Bahn in the year 1928, winter tourism could be developed in Zermatt, and prosperity increased rapidly in the Matterhorn village. The fears of the negative effects of the Gornergrat Bahn were soon forgotten, and, more than one hundred years later, the Gornergrat Bahn is still a jewel in the tourism crown of Zermatt, and, even today, is still the highest altitude, open-air rack railway in Europe. The fascination of making your way comfortably into the alpine mountains by train is unbroken.

The Gornergrat and its famous admirers: Whymper, Twain & Gos

„In order to obtain a full impression of this wonderful area, you have to fly over it in an aeroplane, or, what is much easier, you have to look at it from the Gornergrat, where an astonishing picture of the world of the mountains is spread before the observer. You not only have the whole of the white world of the mountains before you; the valley is also spread below you, with its white churches and chapels, the small blue lakes that seem to be strewn about among the alpine meadows, the hamlets, and all the many paths zigzagging between them.“ (François Gos, 1925)

“The most popular of all the trips that can be made from Zermatt.“ (Edward Whymper, 1897). In 1896, die Visp-Zermatt Bahn transported around 30,000 guests to the Matterhorn village, of whom almost every one made their way to the famous Gornergrat mountain viewpoint – on foot in those days.

Mark Twain ascended the Gornergrat in August 1878 and admiringly enjoyed the Gornergrat panorama: „From this high seat, I had a marvellous view of the Monte Rosa and what appeared to be all the rest of the alpine world. A mighty group of snow-covered summits towered along the horizon. The splendour of the sun on the alpine snow was unimaginable. Nowhere else is there such an exhibition of size and beauty as can be seen from the summit of the Gornergrat.“ (Mark Twain, 1878)