Every two years, in July and August, Zermatt Open Air Theatre performs on the Gornergrat, 2,600 metres above sea level. In summer 2019, director Livia Anne Richard will bring to the stage the story of the first woman to climb the Matterhorn, in “Matterhorn: No ladies please!” 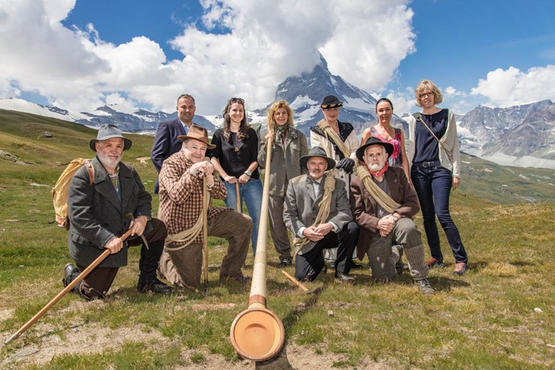 Information about the next Zermatt Open Air Theatre

Livia Anne Richard is well-known in Zermatt. In 2015 and 2017, the director and author produced “The Matterhorn Story” and “Romeo and Juliet on the Gornergrat” on the Riffelberg. Both plays drew audiences of around 20,000 people, with the permanent, powerful backdrop of the Matterhorn.
The cast included professional and amateur actors as well as many local Zermatters, and the current play, “Matterhorn: No ladies please!” does, too.

The first woman to climb the Matterhorn
On 22 July 1871, at a time when female mountain climbers are frowned upon and dismissed as insignificant, Englishwoman Lucy Walker (played by Corinne Thalmann), wearing a long, white woollen dress, becomes the first woman in the world to stand on the summit of the Matterhorn. This incredible success makes her an overnight sensation in England, not least because of the scandal triggered by her actions: Lucy Walker is a noblewoman, and in aristocratic circles, working and sport are not just frowned upon for women, they are practically banned. Lucy ignores this and sets out on her own path – onwards and upwards.

She is admired by a young Zermatt woman (played by Tina Müller) whose journey in life seems to be decided for her because she is ‘just a woman’. It’s a gripping story focusing on women that also casts a knowing spotlight on an incredibly current issue: how much progress has been made towards equality and what we can learn from the past?

Multiple languages and audio guides
Like “The Matterhorn Story” in 2015, the theatre is multilingual. The play including Valais German, English and High German, but if you only understand one of these languages, you will still be able to follow the play. This is intended to reflect the play’s local and international audiences. Audio guides will be available for French-speaking guests.